Smallworld.... it's a world of (s)laughter after all!

Smallworld – Tabletop genocide for all the family! 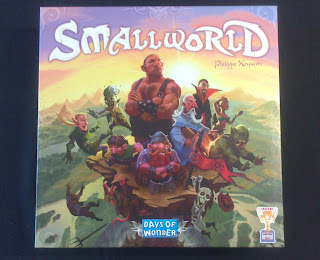 Starting with the box alone the visual appeal of this game is evident from the beginning. The artwork on the box has a humorous and cartoon-esque appearance and is very well done, The overview of the game from the back of the box is sufficient to give a good sense of the game without spoiling too much before opening.
Opening the box presents you, firstly, with a couple of leaflets from the lovely Days of Wonder peeps showing some of their other products and then below these we get to the first of the main components, the instructions. The perfect length and well presented, there is no overcomplicating of the rules which are not hard to grasp at all. There are race and power reference pages and even a diagram showing the best way to organise the plethora of tokens which lay below. Here also are five reference sheets which show turn order on one side and race/power effects on the other, my only gripe is that these are HUGE, they are almost the same width as the box itself and if all five players requested to have one, which is unlikely thankfully, then they take up more space than the board itself and my gaming table ain’t that big chaps and chapettes!
Skipping over the tokens, which are next and require popping from their frames, we find the boards. The two and three player double sided board is a single fold affair with fewer spaces for the two player side and the same for the double fold board for four and five player games. The art on them is really nice, colourful and the spaces are clearly different from each other with any icons or markers easily distinguished from one another. Both boards are of a high quality, much better than some I own but I have seen one or two better.

At the bottom of the box is a two part compartmentalised tray for token storage, one part of which is a removable tray which holds the players race tokens for easy access throughout the game without having to have the box at hand.

The trays are a necessity with Smallworld as the token count is among the most impressive I have seen. I am among those sick people who enjoy popping tokens and counters from their frames and this game was guilty of feeding that habit! There are LOADS!!! (that’s right, three exclamation marks, count ‘em) the tokens easily account for more than half the weight of the game and they are gorgeous, the artwork is extremely well done with the same humorous theme held throughout the game and they have a reassuringly sturdy feel to them even down to the noise they emit when dropped on to the board, I know it’s sad but it really is a satisfying noise!

The components alone are begging for a perfect ten and I had to really struggle to find a point to mark it down. In the end I had to settle for one minor gripe in that I would have preferred the reinforcement die to be made of plastic as the wooden one feels a little cheap compared to the beautiful bits it finds itself surrounded by (it must feel a little depressed when it considers this fact!)
9/10

Gameplay
Simplicity thy name is Smallworld!
This game is so easy to learn that my entire gaming circle had it down by the end of turn one, even my eight year old son had it learned after a couple of turns and the boy can barely concentrate on staying upright half the time!

On the first turn players select a race and an accompanying bonus trait from the selection randomly generated, paying one coin for each after the first in order (i.e. if you select the third race in the queue you must place one coin on the first and second races as payment, which anyone choosing those races gets to keep as a bonus) and take the required amount of race tokens as determined by the numbers on the race and bonus cards, for example Sorcerers (5) and Merchants (2) gives the player 7 sorcerer tokens to use. These tokens are used to claim regions on the board/map which cost 2 tokens to claim and an additional token for each enemy token, lost tribe tokens (who are placed on the board at the start of the game as remnants of the prior settlers of the region), mountain, fortress (placed by a race with the special bonus to do so) encampments or Troll lairs.
At the end of the turn the player may reorganise their tokens to better defend their frontiers and all regions owned by the player will earn then one gold, plus any bonuses earned by any special rules. 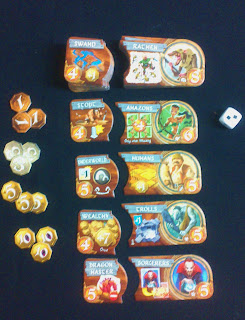 Each player continues in this manner until they are unable to continue with their current race, either through losses in battle (you lose one token for each of your regions taken by other players) or by having spread so far that you cannot expand any more. At this time you may put your race into decline, at which time they are flipped over and no longer active pieces, merely remnants of former glories, and then choose a new race from those available and continue anew on the next turn.
This continues for a set amount of turns, as allocated by the turn tracker on the board, until the final turn when the winner is determined by the number of gold coins earned.
When played with four or five players this game shines in a class all of its own, It has all of the subtle tactics and vicious backstabbing that any gamer could ever want. The joy in seeing someone take a gamble and gain control of several regions only to have the next player ruthlessly annihilate them is a joy not seen in games of a similar nature. It also helps that the random combinations of race and power means that the backstabbing often leads to a revenge play happening sooner rather than later and you never know what combo will be next from the pile. This fact also helps with the replay value. Because the races and powers are drawn from randomised piles each game you will not see the same pair drawn very often and therefore, peoples choices will differ from game to game based on their preference and the choices of other players.

The gameplay is brilliant and I can’t wait to add some of the expansions to it if only for the new races!
9/10 (that dice dammit!)
Posted by Beard Plays Games at 02:38