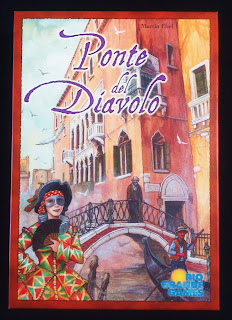 Designed by Martin Ebel and published by Rio Grand Games, Ponte Del Diavolo is a tactical tile placement game for two players in which players attempt to build islands and connect them with bridges (the name itself translates to “Devil’s Bridge”).

All of the pieces other than the board are wooden which adds a nice tactile element to an otherwise sterile appearance. There are 80 wooden tiles, 40 red and 40 white which are divided between the two players and 15 grey bridges as well as a 10x10 board which, admittedly isn’t fantastic but serves its purpose.

The main purpose of the game is, each turn, to place two of your coloured tiles on the board and make islands comprised of four pieces and connect them with bridges, scoring more points for each connected island at the end of the game. These islands may not touch another of the same colour in any direction but can touch opposing islands, in fact this is one of the main tactics of the game as the bridges can only be placed over blank spaces and may not cross over island tiles. This is where the strategy of the game is most evident as you are made to think multiple moves ahead from the first as you attempt to isolate your opponents islands while leaving your own open to build bridges. 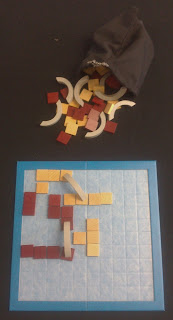 Gameplay.
The game is really easy to pick up and a great filler for any game day/night as an average game takes 20-30 minutes at most. The abstract nature of the game may put some off but for those wanting a good, short, inbetweener game I can easily recommend this. With prices around £15 or less (I picked mine up at a branch of The Works for £7.99) you could do much worse than this little gem.

I’ll give Ponte Del Diavolo 7/10 but only when compared to other filler/abstract games as it wouldn’t really stand up to a more thematic game.
Posted by Beard Plays Games at 12:48