The Witches - Trying not to get yer cackle on!

The Witches: A Discworld Game 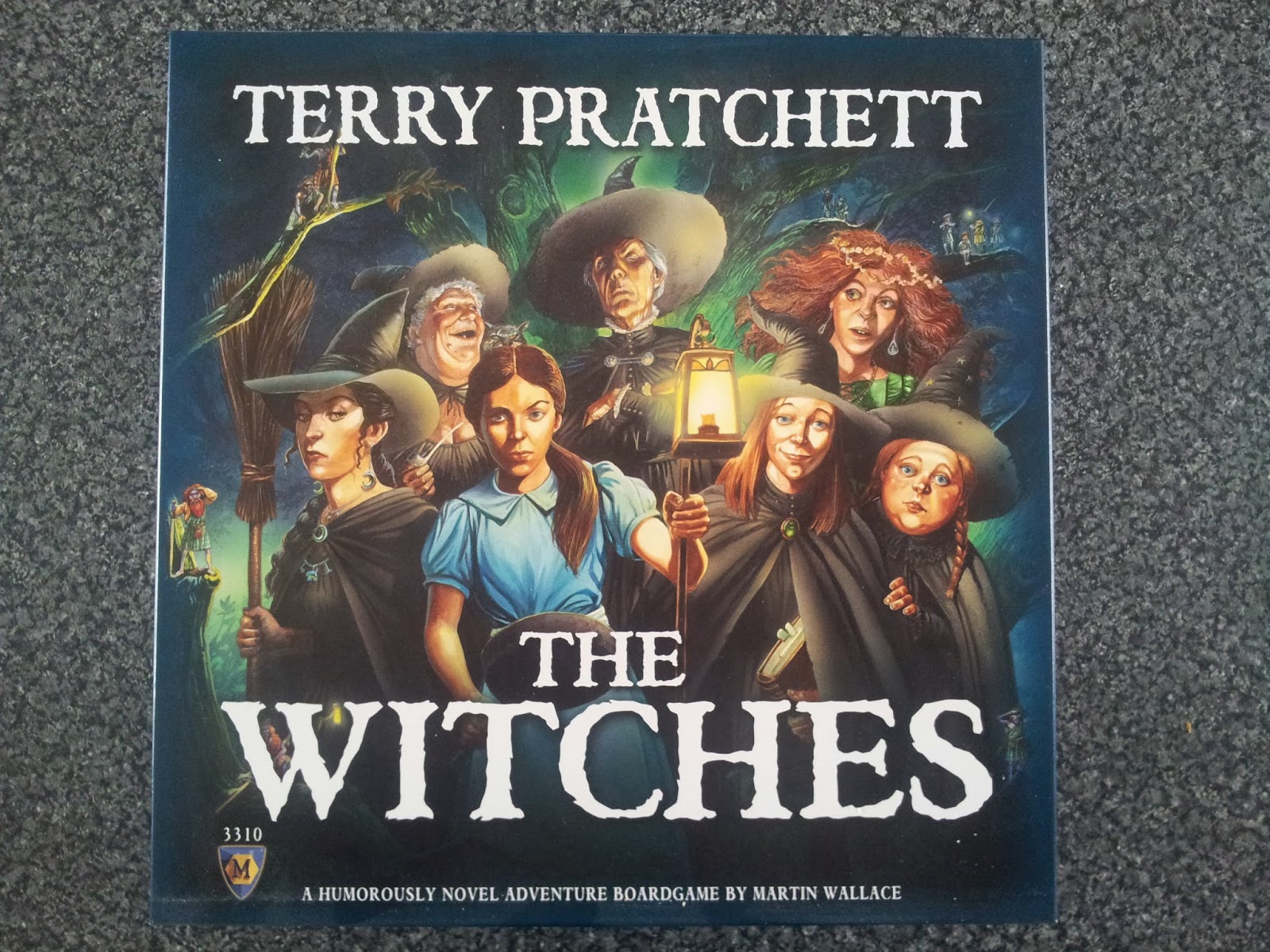 Designed by Martin Wallace and published by Mayfair Games The Witches is a semi co-operative dice rolling/set collection (it’s not as confusing as it sounds) game in which the players take on the roles of a cadre of Lancre witches as they roam around the region dealing with the usual trials and tribulations of their kind such as sick pigs, deaths and the occasional outbreak of supernatural nastiness! 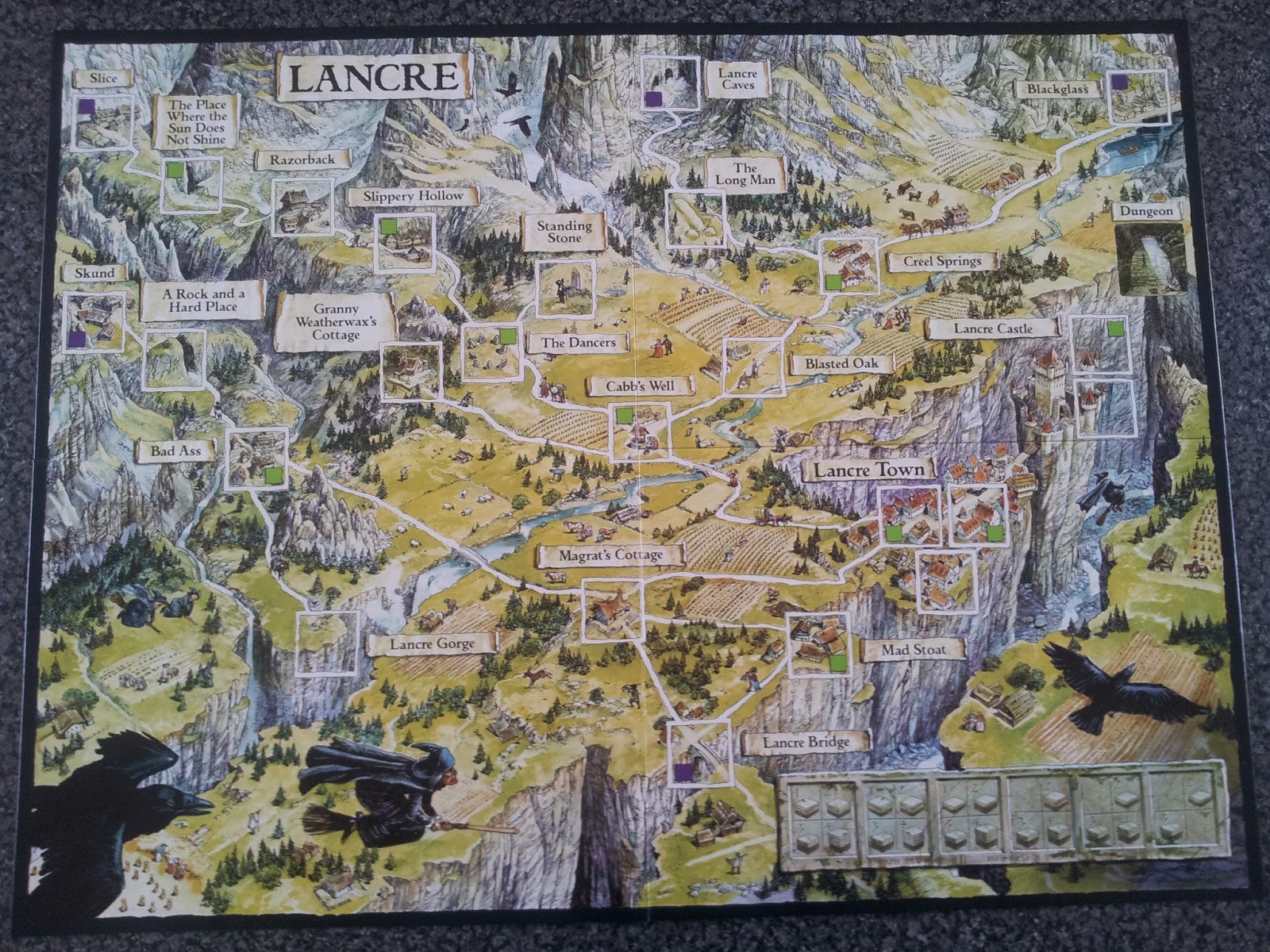 With the artwork being handled by the Discworld Emporium, home of the official merchandise for Mr. Pratchett’s workings, the look of the game is fantastic. The box art features a group of the Discs wise Lancre ladies and a few of the Nac Mac Feegle hidden thereabouts (small, blue, Scottish pixies who think they are already dead and in heaven for those of you who are not readers of the series)
The board is drawn beautifully and shows a birds eye view of the region of Lancre and all of the locations made famous (or infamous in some cases) in the books, from Lancre Castle and Granny Weatherwax’s Cottage to The Place Wher The Sun Does Not Shine and The Long Man (a rock formation in a VERY suggestive shape.... cue close up!) 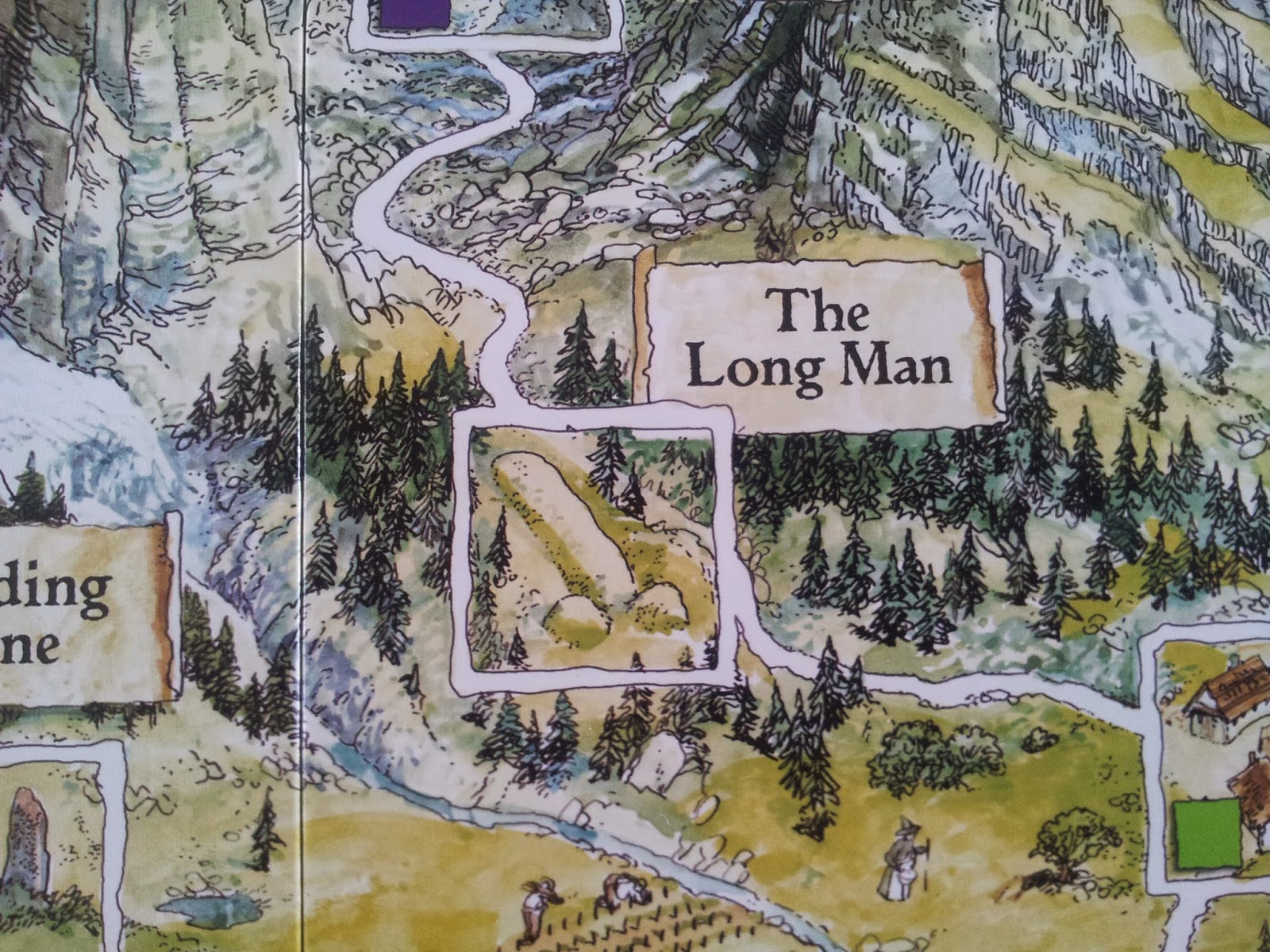 The board itself is great quality and suffers from no warping, ours has had quite a few games and is still box fresh!

The player boards each feature a portrait of one of the four Witches you play as and a description of their special ability...
Tiffany Aching can become invisible, passing through otherwise impassable spaces.
Petulia Gristle has the ability to cure one sick pig event free.
Annagramma Hawkins has a free use of magic but starts with a cackle token.
And Dimity Hubbub always goes first. 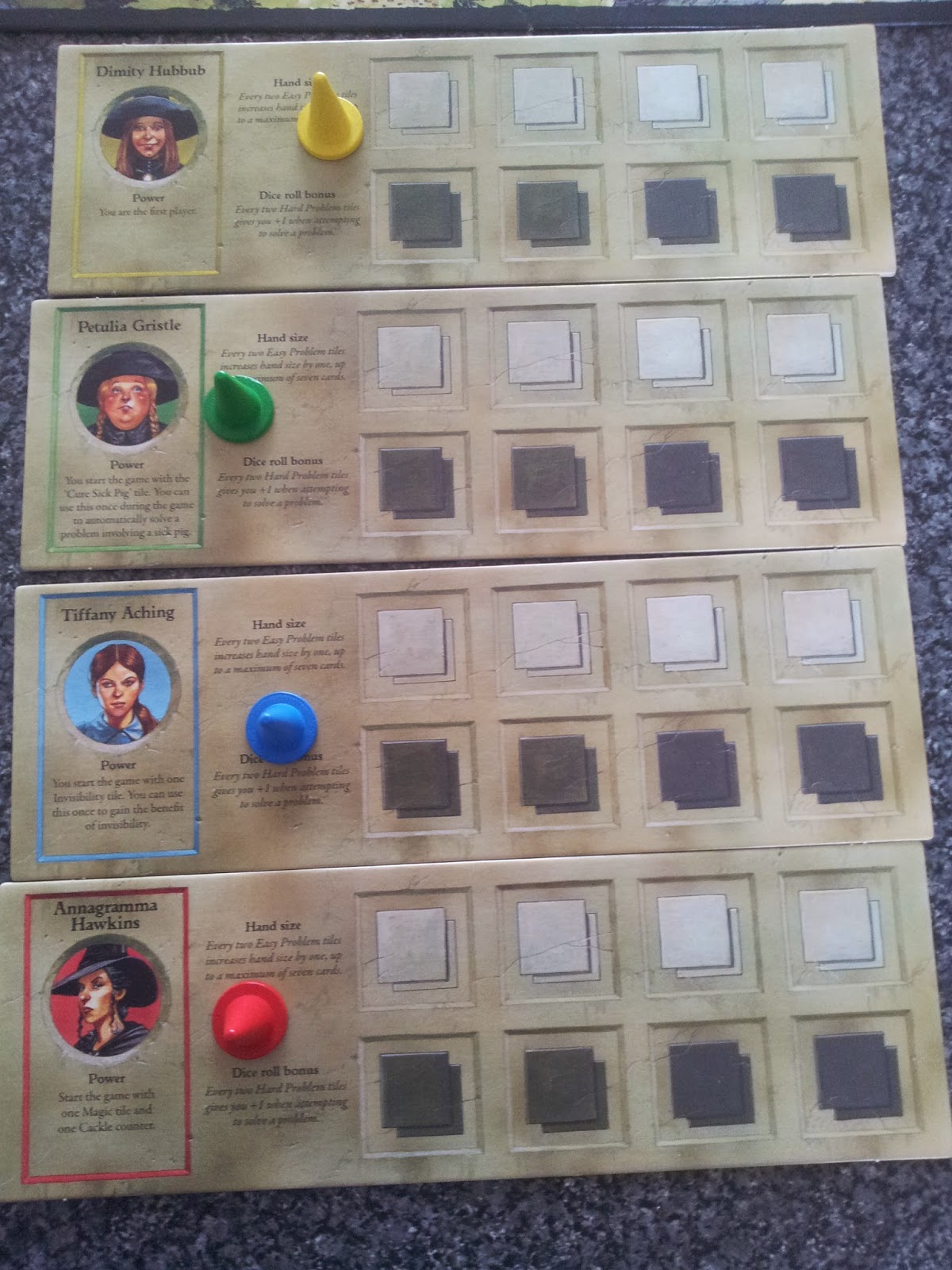 Each has a coloured border and matches the player pieces which are four coloured wooden witches hats which look really good on the board, I would have preferred some miniatures of the witches themselves to play with but there are companies who make them anyway so they can easily be bought later. 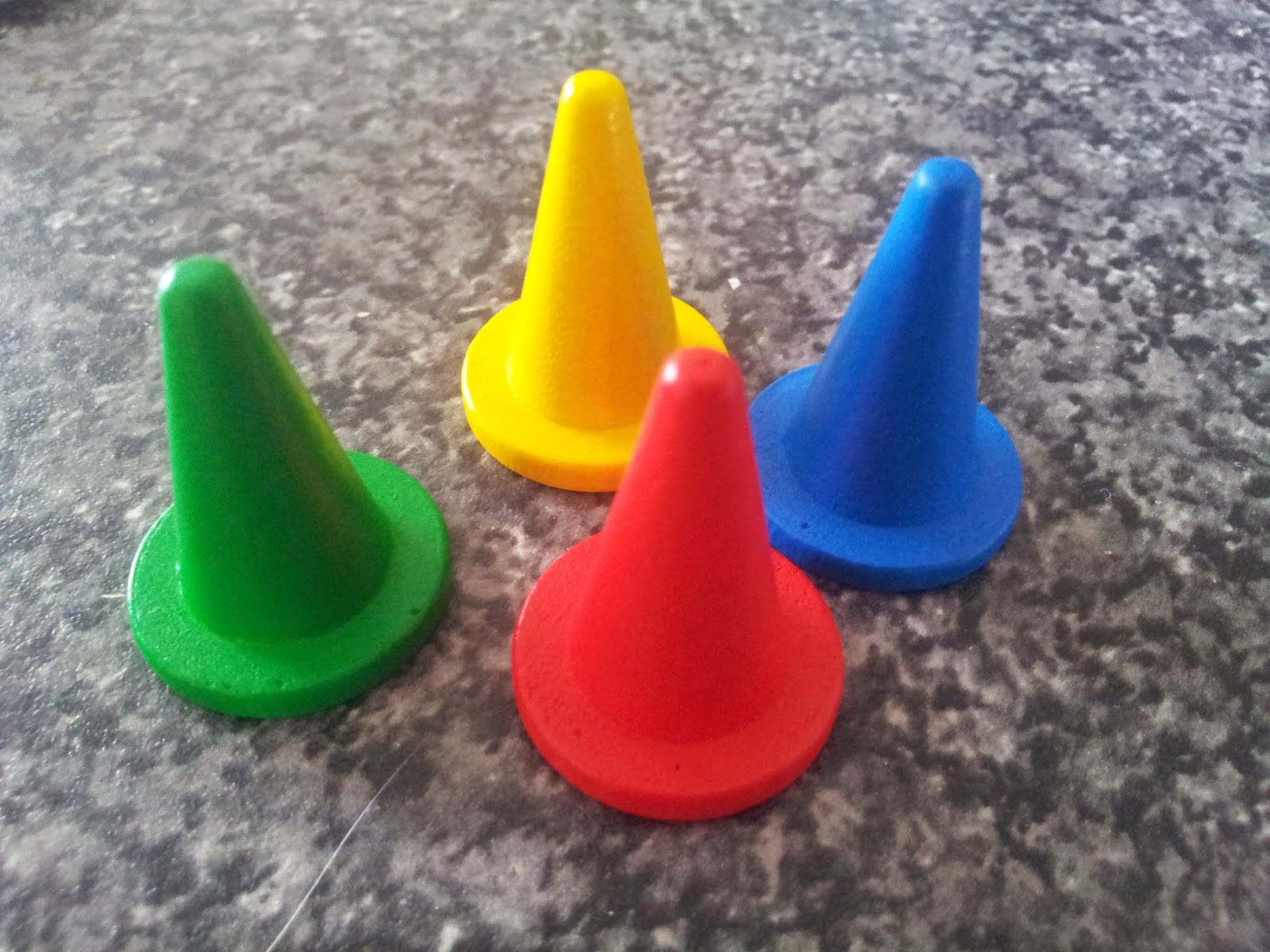 The dice are nice even though they are wooden, I’m not a fan of wooden dice, and have 2-6 as usual but the one spot shows the face of a cackling witch. You do not want to roll this in the game too often. 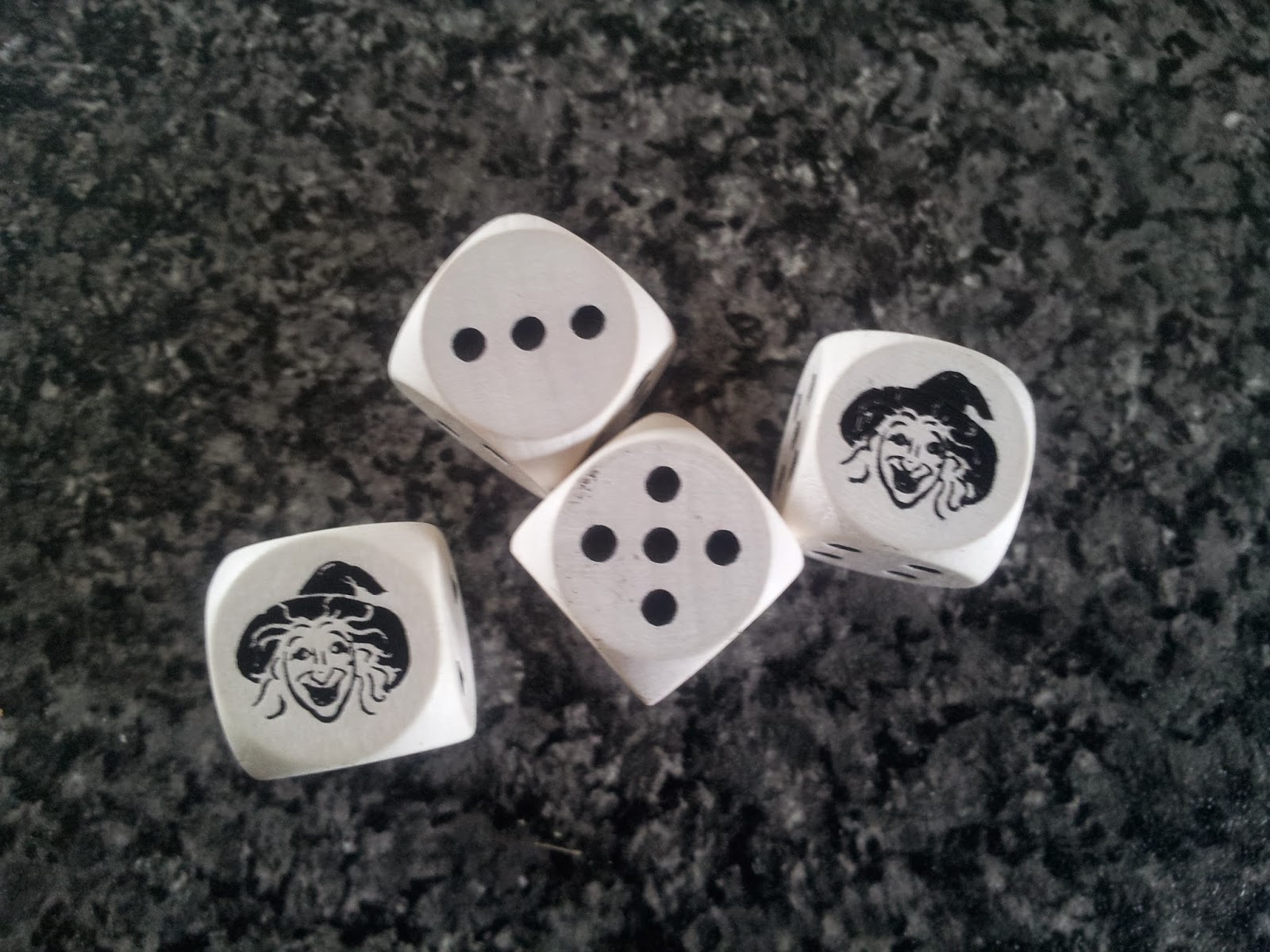 The problem tiles, in two colours green and purple, are really well printed, have great little images on them and have a great finish to them as do the cackle tokens, showing a laughing hag and the Crisis Counters with worried villagers. The tokens you never want are the Black Aliss tiles as they decrease your end game score if you have any, and you cannot rid yourself of them. 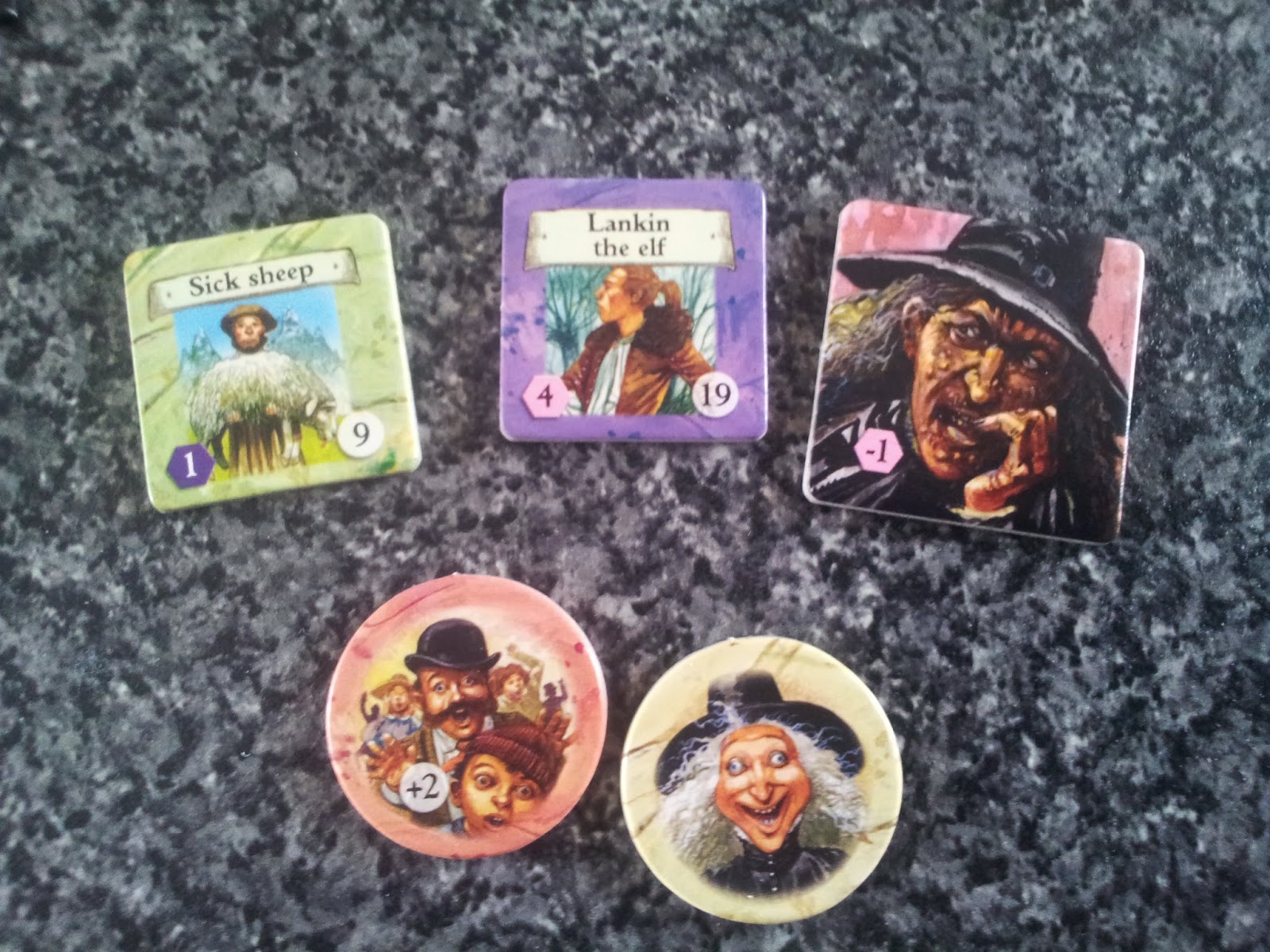 Lastly the cards. They are the best cards in a game that isn’t all card focused I have. They are standard poker sized and finished with a quality coating meaning no sticking and easy shuffling. The pictures on them are of equal quality to the box art and feature many denizens of the region featured in the books as well as one or two specials, like invisibility or Tiffany’s frying pan (useful for dealing with faries apparently) 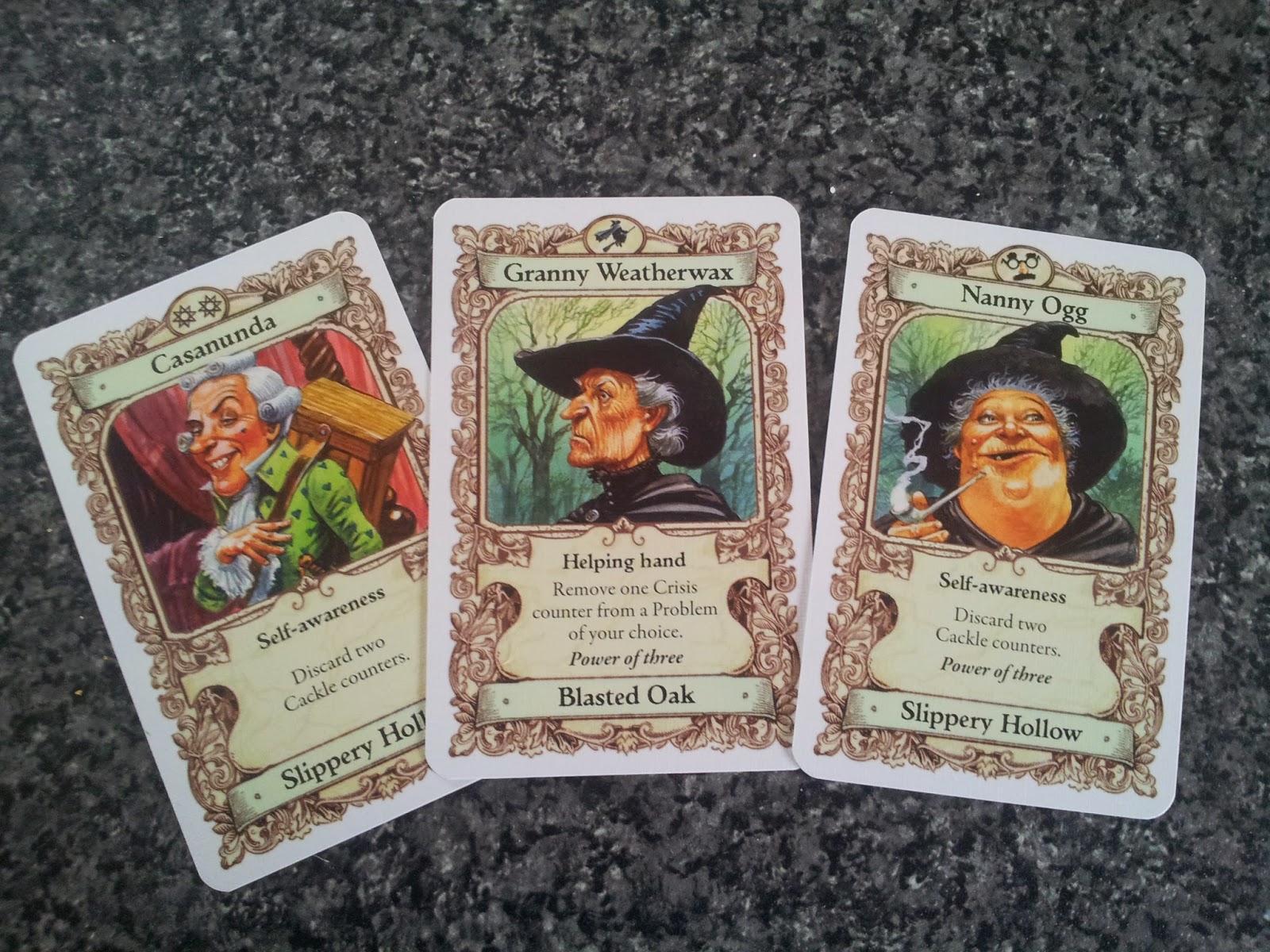 The components are really good, as I said I would have preferred some mini’s for the player pieces but I’m very happy with the rest of the parts. 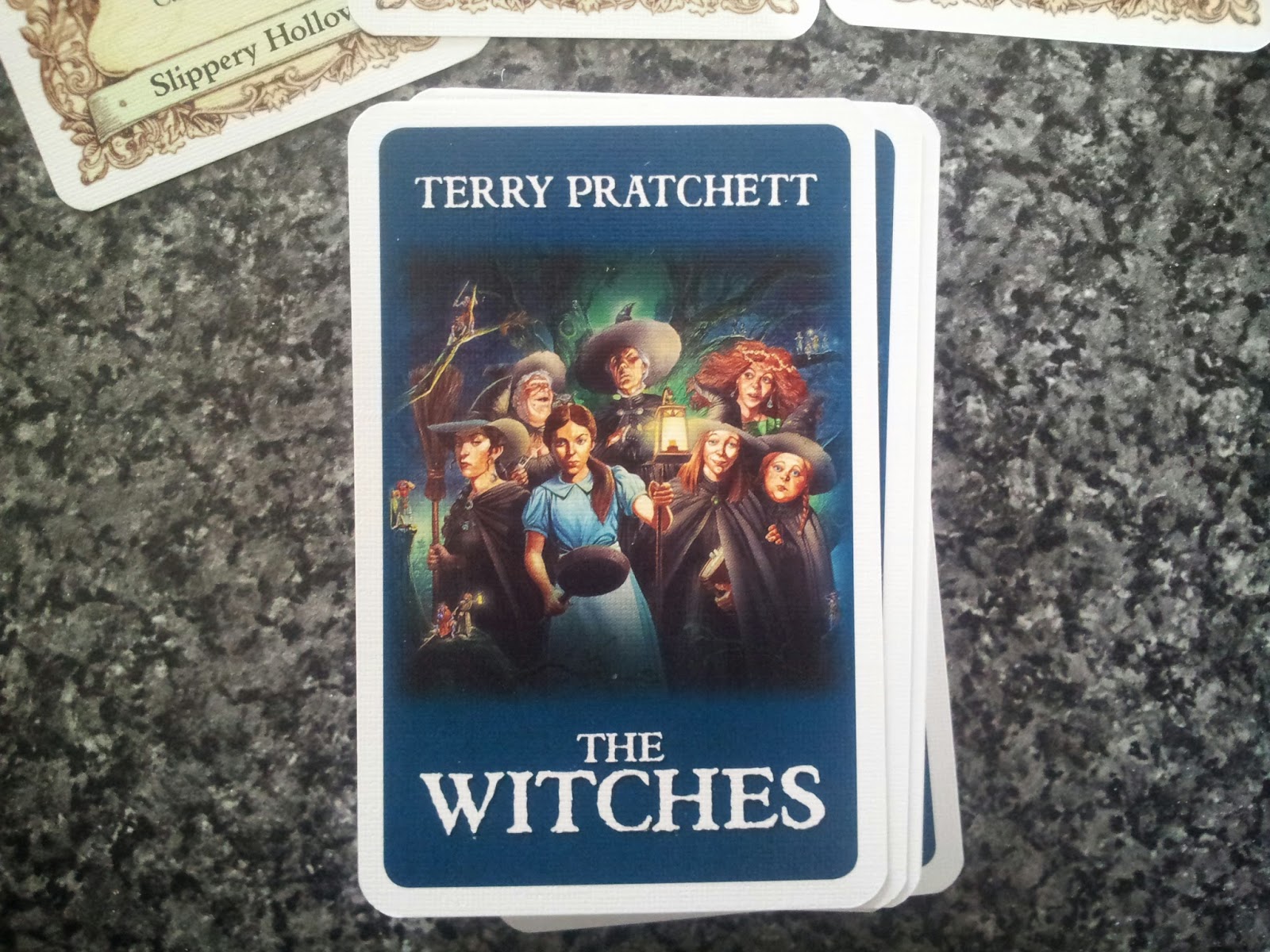 During your turn you start with placing a problem tile. You draw the top card from the deck and place the next tile from the holding area (bottom right of the board) in the location shown on the bottom of the card. If there is already a problem there it gains a crisis token, which increases its difficulty by 2, and you draw a new card to try and place it. Continue until it is placed.
Next you move your Witch for the first time. You may move your witch up to two spaces along the paths on the board, or to any space if you use a card with the broomstick image at the top. If you encounter another witch or a problem tile you must stop and take action. If you are on a space with a witch you can stop and ‘Have Tea’ which enables you to discard up to three cackle counters, and your fellow witch(s) up to two. If you are on a problem you have to decide whether to try and deal with it.

To deal with a problem first check the difficulty of the problem shown in the bottom right of the tile, then you roll the first two of the four dice. If you roll a witch icon at any time you gain a cackle token unless you can play a reroll card to negate it. If there are no cackle tokens in the pool to take you take one from the player with the most, and if that’s you you have to take a Black Aliss tile which are worth a permanent -1. If after this first roll you are confident that you can take the problem out you now have the chance to play any modifier cards, either for the effect in the text box or the icon on the top (see picture) and roll the second set of dice. If you succeed you claim the tile and add it to your player board where every two of each colour provide a bonus (+1 hand size for two green and +1 to rolls for two purple) if you fail you have to retreat to the next space on the path and taking a cackle counter, if the space is not empty you take another cackle counter and continue in this fashion until you are alone on a space.

The purple tiles, which remain face down until encountered, are the hardest problems and feature some of the supernatural elements the witches face and some have extra effects if you fail them such as forcing you to take Black Aliss tiles or even for the game to automatically end and the witches to lose if you have three or more elves face up.
You then refill your hand to the maximum, starting at three cards and then adding one for each green pair you have up to a maximum of seven. 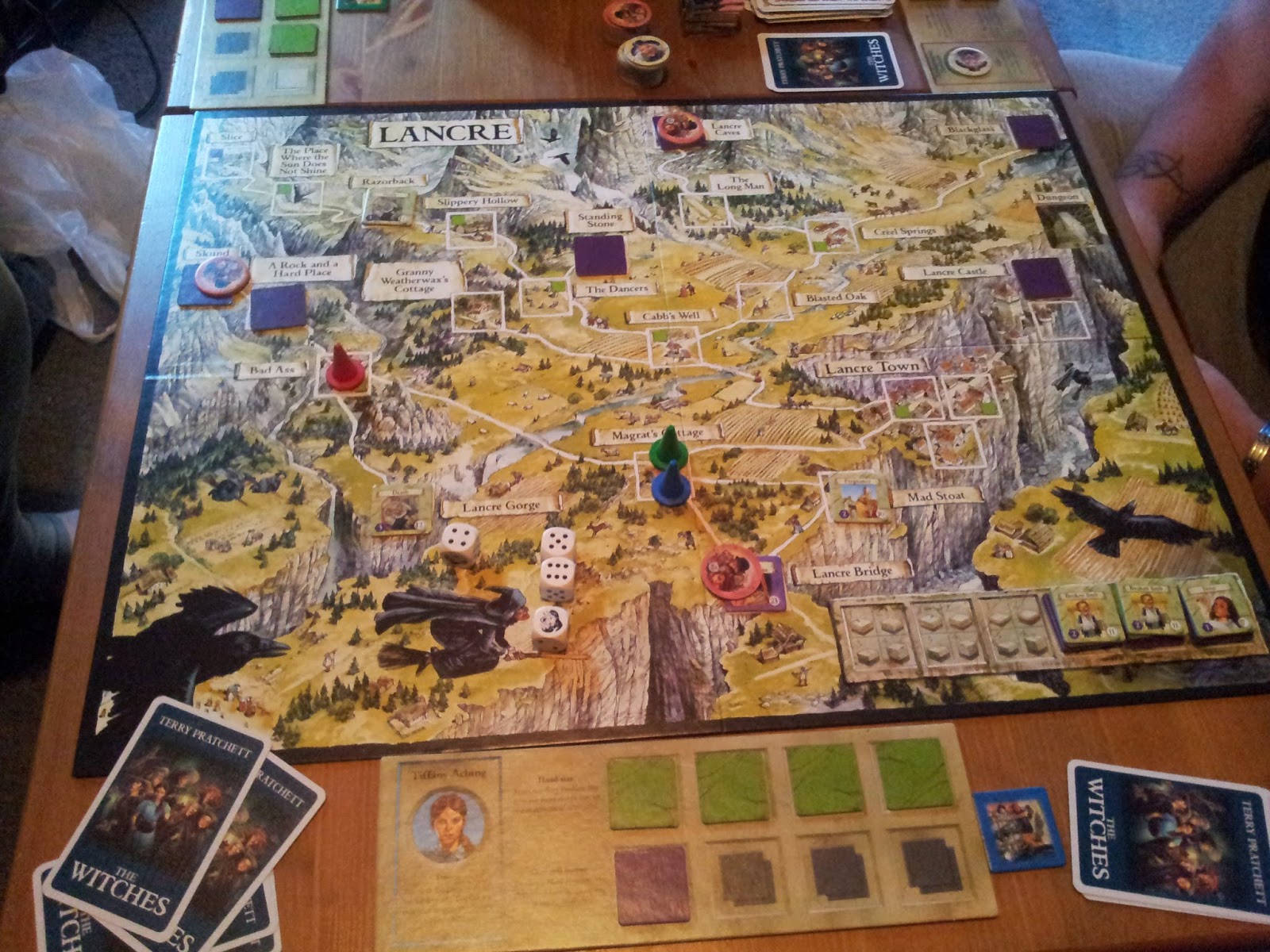 Once all of the problem tiles are out of the holding area the game ends and the scores are counted, shown in the lower left of the tiles you have collected, and the witch with the highest score wins. But there are two ways that the board can win. As mentioned before, if there are three or more elves face up on the board, you lose also if you have to place a crisis counter and there are none to place you lose, meaning taking care of the problems made harder by crisis tiles is important as is not revealing too many hard problems unless you are confident you can defeat them.

The game has a semi co-op play style to it as you need to work together in a sense to stop the board from winning, but you are all competing to be the best witch so you find yourself swooping in and nabbing a couple of the easy tiles your opponents are headed for just to bolster your hand for later.

The game is a brilliant, simple to learn and teach game for most ages, the guideline says 13+ but the only thing I can see that would be unsuitable for younger people is the ‘Long Man’ on the board being a tad suggestive. I will give The Witches 8/10, if there were mini’s I would give it a nine, it is SO close to being my perfect idea of a quick, fun game and I would ask any player to give it some consideration.
Posted by Beard Plays Games at 07:00