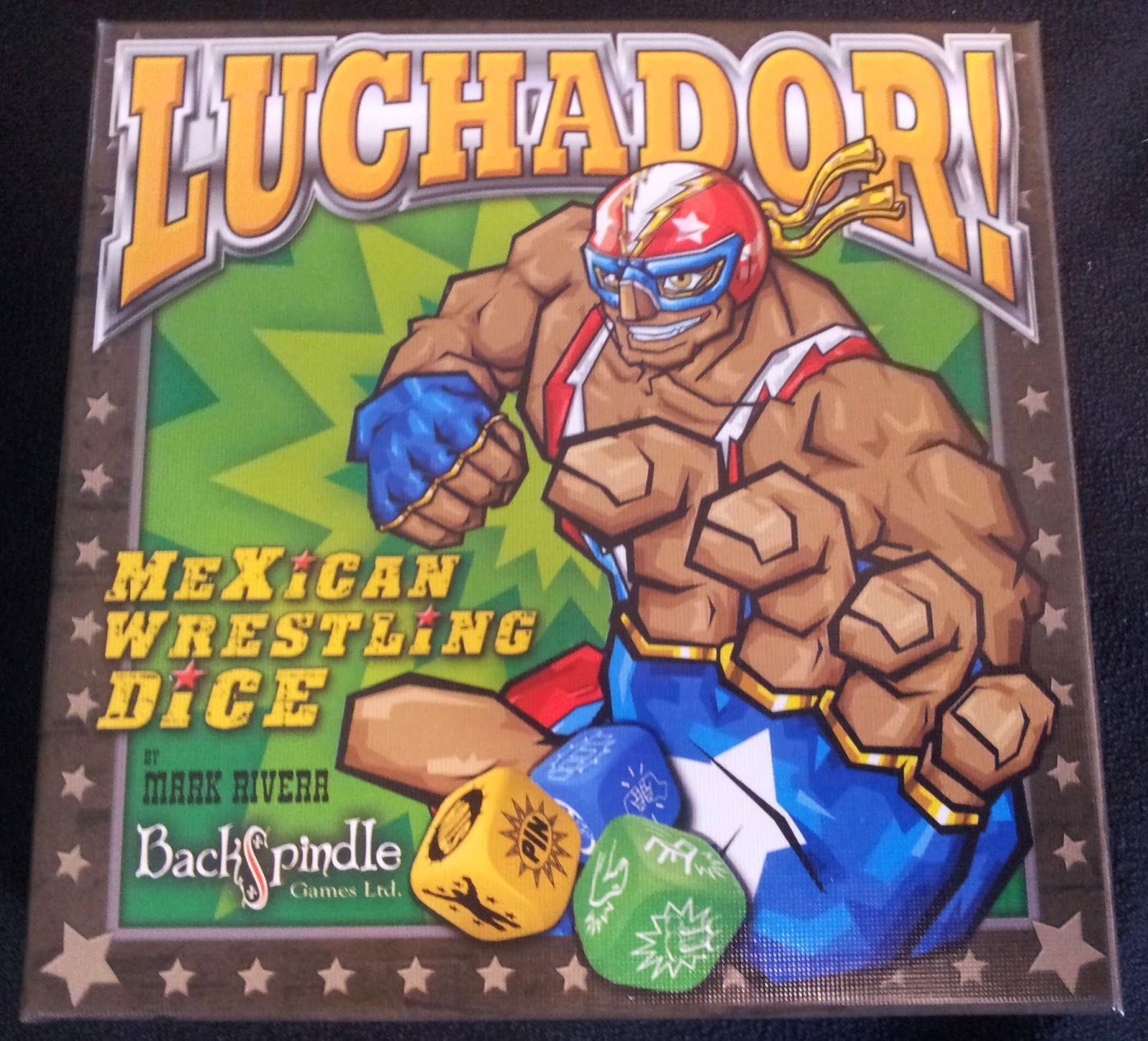 Before I start I feel I should warn you, I LOVE this game. This will essentially take the form of a love letter to a small box of cardboard and plastic.

Starting with the box, while smaller than I expected, is perfectly sized for the contents. Space wastage has been kept to a minimum for once. The box, as does all the card elements, has a linen finish to it and has a realy high quality feel. The cover art features a very stylistic Luchador, and this is the style throughout, and it seems to fit perfectly. I feel that if the designers went for a more realistic appearance it would not have gelled as well with the game.

The players character cards feature six Luchadors, four male and two female, all of which feature the same game related info (the damage/results of the Luchador dice when rolled) but all have individual flavour text describing each of the grapplers signature moves as they sail around the ring kicking their opponents squarely in the mask! 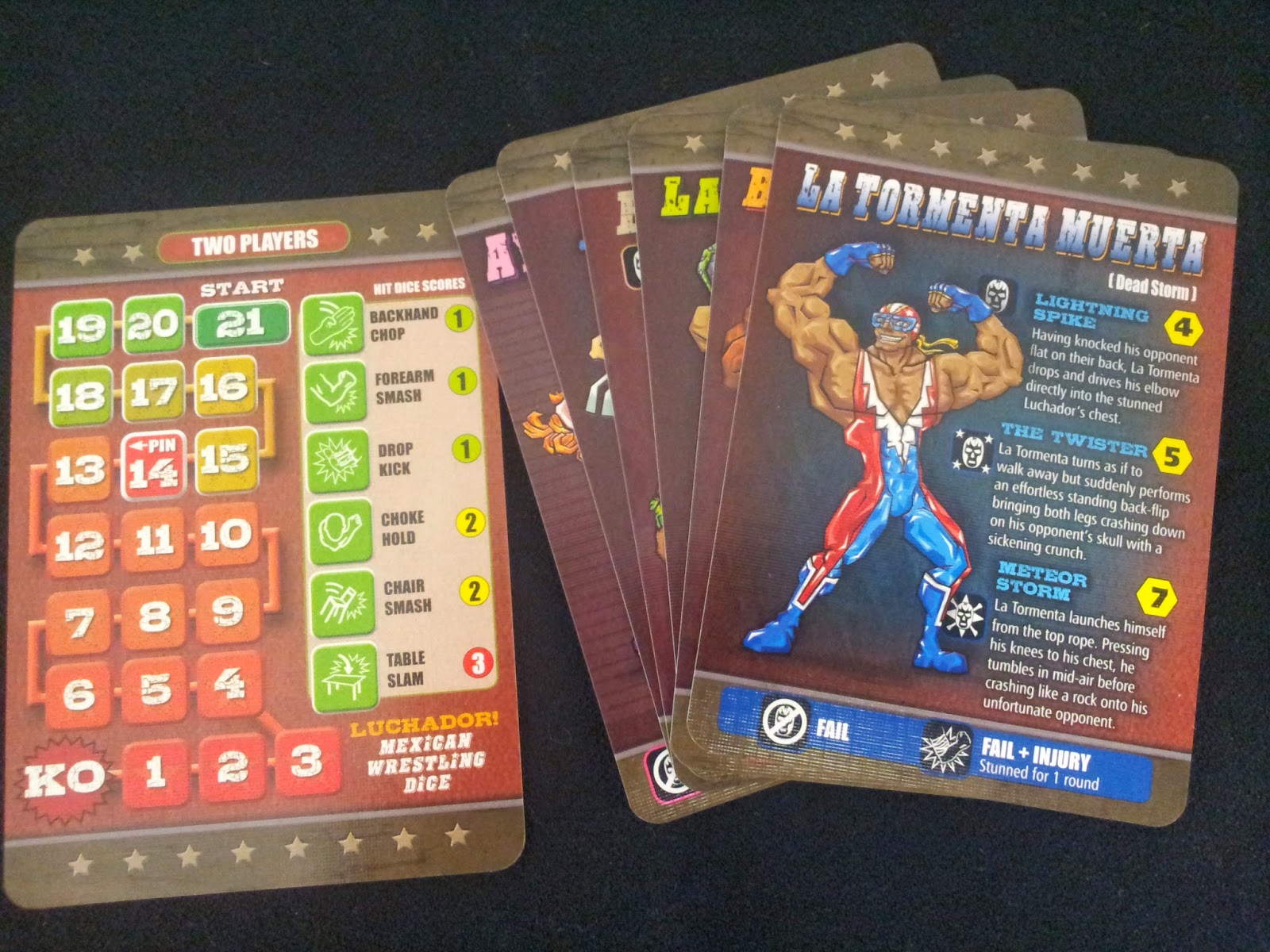 Each player also has a strength tracker (essentially a health bar) with a track beginning at 21 and descending to K.O. (0), the progress of which is marked using small wooden discs. These cards also have a quick reference guide showing how uch damage the basic attacks deal to your opponent.

The board is my second favorite piece of this game. A really high quality feel, four-fold board resplendent with an aerial view of a wrestling ring complete with ropes, turnbuckles and bingo hall floorboards on the outside. Two of the opposing corners are decorated with red and blue padding indicating where the two teams roll from. 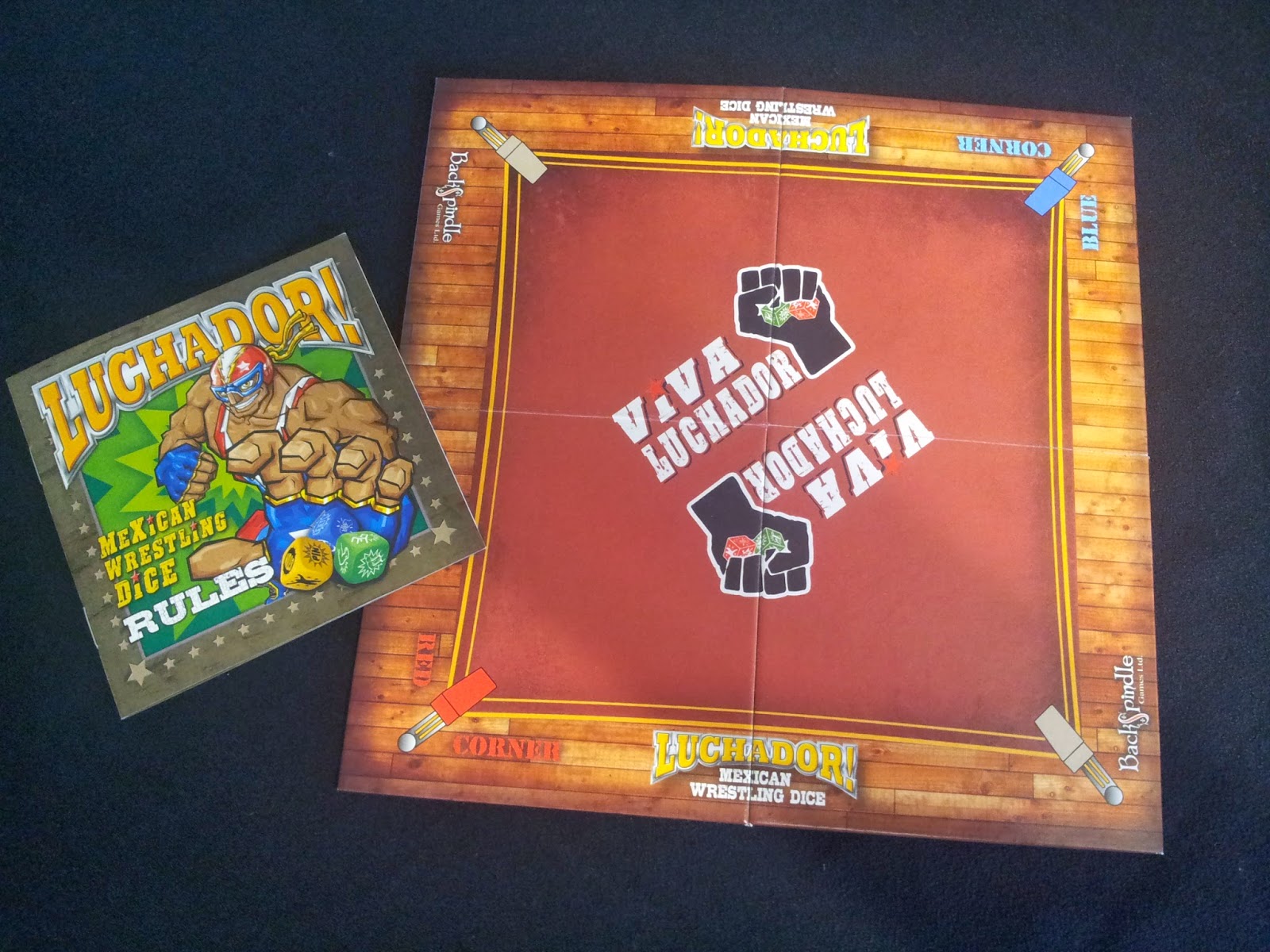 Finally (deep breath) the dice (swoon) These are the best proprietary dice I have. I have some awesome standard d6’s but for a handful meant for one purpose these are fan-fricking-tastic!
They feel great and are the perfect size, the printing looks well done and looks to be able to stand up to many games.
Each player is equipped with four ‘Wrestle Dice’ in their corners colour, showing the results of Hits, misses, blocks, counter and pin. One green ‘attack dice’ to determine how you assault your rival Luchador and one yellow ‘Pin Dice’ for when you feel you can make an attempt to win. Finally there is one black ‘Luchador Dice’ which is 50% larger than the rest, used as a gamble to go for a high risk signature maneuver with the risk being a miss or a fail, injuring you and depleting your possible attacks later.

For the components alone I am leaning heavily towards a perfect score. There is no unnecessary gubbins, everything is used well and I can find no fault with any of it. Great quality throughout.

To begin a round each player simultaneously rolls all four of their ‘Wrestle Dice’ into the centre of the ring, with any of the dice coming to rest off the board being discarded and not counting this round. This is where one element of dexterity and strategy come in as a sly attempt to jostle your rivals dice with your roll, knocking them from the board can be a tactical risk worth trying, just be sure not to be too over-zealous and send your own die flying out of play!
Players then pair off the dice in play, hoping for some hits to make it through. A hit can be blocked simply negating it, Countered which turns the attack back on you. Misses are simply discarded.
Pins when rolled can be dealt with one of two ways.
If your opponent is not weak enough to succumb to a pin or you simply do not wish to go for one you may re-roll any Pin Dice once each.
If you wish to attempt a pin you set them aside until the attacks have been dealt with. 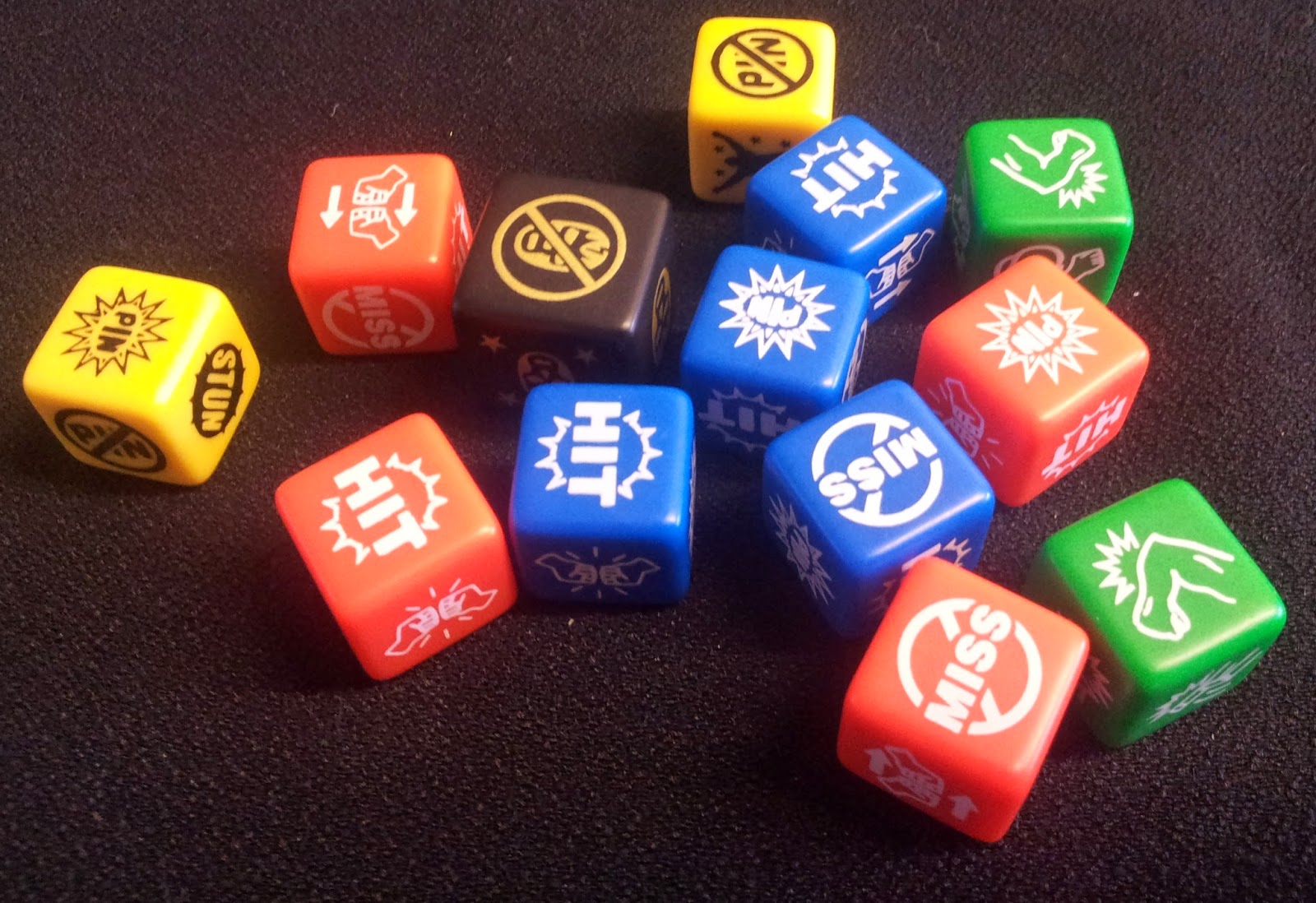 Any successful attacks and counters now allow you to roll the Attack Dice to see how you assault your rival. These attacks are a Backhand Chop, Forearm Smash and Drop Kick each dealing one damage, A Choke Hold and Chair Smash dealing two damage and a Table Slam for three. When taking damage you move your wooden disc down the track.
If you have two matching attacks or counter attacks you can trade them for a roll of the Luchador dice giving you one chance each of dealing 4,5 & 6 damage, two misses and a fail which means you are stunned and lose a dice next round.

Once your opponent is below 14 strength and you rolled a Pin result you can now roll the Pin Dice and go for the win.
The Pin Dice has four Icons. 2 Pins, which forces your opponent to face a three count. 2 No pins, essentially a miss. Stun, the pinned opponent suffers a loss of one dice next round instead and lastly ‘Viva Luchador!’, you pose for the crowd and regain one health/strength.
To answer a three count when pinned you have three re-rolls to gather a mix of three blocks or counters, saving your successes and re-rolling the rest. If you gain three blocks/counters you kick out, if not. you have been pinned and you lose.
If you are lucky enough to roll three matching successes, blocks or counters, on the first count you reverse the pin attempt, forcing your rival to face a three count regardless of their remaining strength. (I did this just last night for a cheeky win after my Fiancée battered me for the entire game and almost K.O’d me!)

If at the end of the round no-one has been pinned or KO’d you gather and roll your wrestle dice again and lock up for another round. The first to score a pin fall or KO their opponent wins and gets to parade around the table playing their theme music (Wolfpack for me, N.W.O 4 life!) 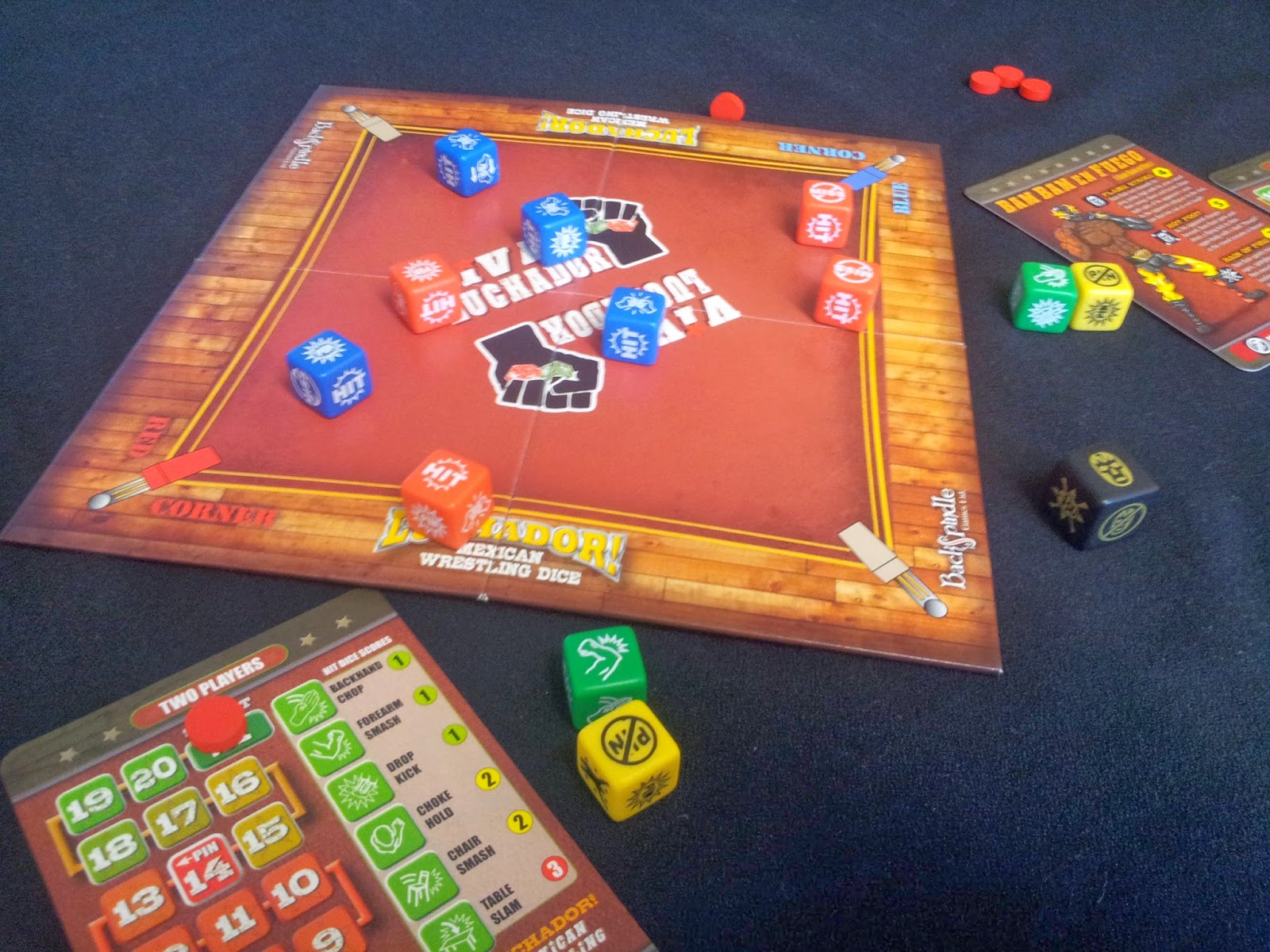 Being both a lifelong wrestling fan and a man with a big thing for dice I had to try this game. The hobby is poorly stoced with wrestling themed games save for some card games, only one or two worth even looking at let alone playing.
I was a little unsure as to how the dice mechanic would fit but I was pleasantly surprised with how well it plays and all comes together.

This game isn’t going to float everyone’s boat but, personally, I love everything this game brings to the table. Theme, components, gameplay, replayability, ease of tutorial, everything. This game is going to see the table a phenomenal amount of times as it makes a stonking start to a game night or a halfway palette cleanser to put in between heavier games. Quick, easy and a fun as hell game that has already become a favorite.