Star Wars Pocketmodel TCG... These aren't the cards you're looking for! (Sorry!!!) 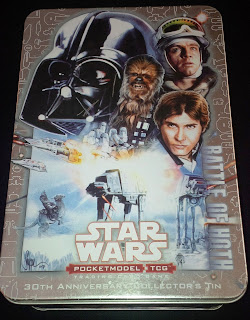 Recently there has been much talk about Fantasy Flights X-Wing game and in the run up to picking that up myself I thought I would have a quick reminisce about a prior use of the license. Released by Wizkids in 2007 Star Wars Pocketmodel TCG placed the much loved and often argued about franchise into the constructable strategy game system introduced in 2004 with their Pirates line.

This is essentially a pretty regular trading card game but with the novel twist that your main forces, those used for attack and defense, are plastic slot together miniatures, each with a base showing the regular guff found on a character/unit card you would expect to find in such a game. 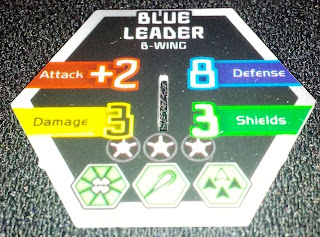 The models themselves are pretty faithful to their subject matter for the most part even if the scale is a little wonky sometimes. (a Taunton and rider are shoulder high to an AT-AT!) and the information on the bases is clearly printed and spaced out, I have a lot of these models and one of the positives I can hold up for this is the print quality has always been perfect.

Assembling these models is usually a pretty simple affair, punching them from the plastic frames and slotting them together. Then you get the awkward ones. Some of the really small pieces can be a taxing effort, being a sausage fingered clummox as I am I sometimes had a number of attempts before getting them together but that being said I am a seasoned model maker and I can deal with tiny pieces. The main horror comes when the instructions inform me that in order to get two pieces together they need BENDING! This may be plastic (of sorts) but it does not easily lend itself to bending, especially when the piece to be bent has slots or voids. It is prone to snapping with very little stress needing to be applied and snapping a leg/gun/wing/insert-part is easily done and I have a small fleet of injured ships to attest to this. 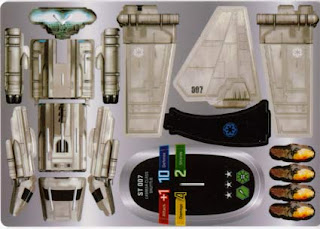 Along with those fragile sods there are the cards, used as resources and modifiers for attack and defense along with some special effects. These feature stills from the movies (with an unfortunate majority from the prequel travesties) and the information is plain and easily read, not weighed down by unnecessary fluff and forty-two icons only two of which are actually needed. 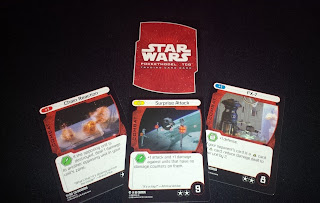 The cards are a tad bland. The dark red colour scheme and the usually dark images in the pictures contrast massively with the stark white text boxes and as a result they are not the most appealing cards.
Also, each booster pack, along with the randomly inserted ships, comes with a pair of the worlds smallest and most useless dice and some slot on damage tokens which resemble smoke trails.
Including dice with each booster was a nice touch, meaning that potential players only needed a pack each for a small game, they are useless! Far too small to be used properly and they really shouldn't have bothered. 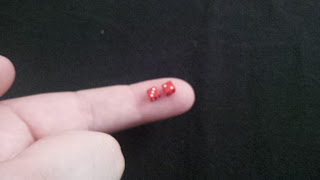 The components of this game are pretty standard card-wise but the models make up for this fact if by novelty alone.

For a full game each player needs to build a deck of no less than thirty cards and a force of no more than thirty build points of units, the build points are shown with stars on the models base with one star equaling one point.

The game takes place in three zones. Each player has a 'Home Zone' in before them where their forces start and where their objectives are placed. The third zone is the 'Contested Zone' and lay between the home zones and this is where the majority of the combat will take place as both forces have to cross this zone in order to reach the opposing home zone. 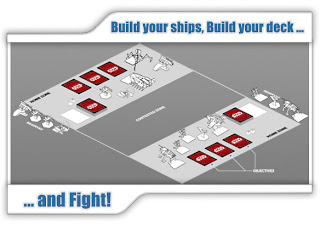 The players place the first three cards from the top of their deck into their home zone face down as objectives, the destruction of which is the main aim of your opponent, and also chooses up to twenty build points of units in the home zone, the rest are placed to one side in reserve.
Then each turn consists of two phases in the following order...

1) Play one objective.
Players may take one objective card from their hand and play it face up, replacing a face down objective, discarding the replaced one, and applying any effects or bonuses the card confers.

2) Take ONE of the following actions.
a) Move...
Choose up to five build points of units and move the one zone forwards or backwards.

b) Combat...
Choose up to five build points of units and declare an attack on opposing units in the same zone.
Each player may play one card from their hand to boost attack/defense and the attacker then rolls 2D6 and adds the result to the attack score of the unit plus any modifiers, if this score equals or beats the defense score of the target damage is dealt equal to the damage score of the unit and if that reaches or exceeds the shields of the target it is destroyed.

c) Strike...
Choose up to five build points of units in your opponents home zone and make an attack against an objective using the figure in the lower right as a defense value. If the attack strength matches or beats the defense, including any modifiers, the objective s destroyed and you are one step closer to victory! 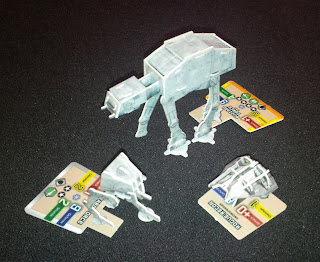 Once either player has no more objectives or no more units in any zones they are out of the game (which is usually me because, as per usual, my fiancee has a knack for aggressive play and destroys me)

Star Wars Pocketmodels TCG made a refreshing change to the usual card games at the time if only for the novelty of the 3D model cards, unfortunately the fragility of the models means that unless you have a stable, permanent storage space and intend to never transport them, unless swathed in foam, they WILL break and sadly some of the better models are the more at risk, I have a poor three legged AT-AT as proof! 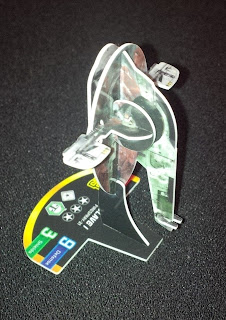 The gameplay is a little on the standard side as TCGs go and the fragility issues mean I would usually give this game 6/10 but for one serious point...

Damn you Binks. Damn you to Heck.
Posted by Beard Plays Games at 08:53