Army of Frogs by John Yianni

First of all I will start with an apology of sorts for my lengthy hiatus, suffering with a lack of creative juice I retreated into my beard and sought solace in the buttony arms of my classic video game collection! But NO MORE!!! Regular cardboardy service shall be resumed forthwith. 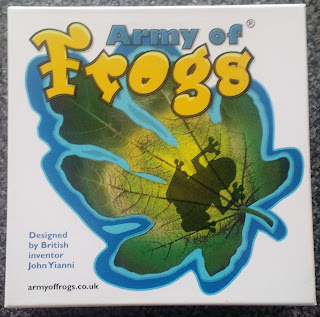 Designed by John Yianni, creator of multi award winning and nominee Hive (I don't have it yet, look it up, looks great!) Army of Frogs is a two to four player strategy game in which players place and move their coloured 'Frog Stones' into a winning position by leaping over others while simultaneously placing others to block the other players potential moves. 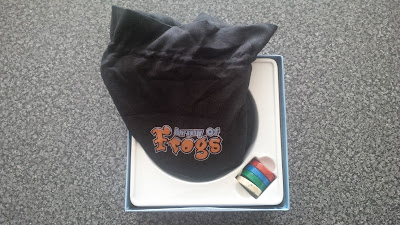 The box, and the art thereon, is a pretty plain affair and I wasn't really taken with it at first glance, but at the insistance of the gaffer (otherwise known as my Fiancee) I picked it up, for the reasonable price of £5 from the Works, and carted it home, noticing at once the weight as for a reasonable small package it weighs in at just under 1Kg.

Upon opening the box my opinion changed substantially. Held withing the box are the playing pieces, the 'Frog Stones'. Made from a Bakelite-esque material they are hex shaped tiles with a raised frog design on them whose back forms a handle of sorts for ease of handling mid game. They have a brilliant tactile quality to them and the sound they make, clacking together when you are rummaging in the bag for a new piece, is really good. The player colour tokens are made from the same material and are simple discs a little smaller than the frogs. 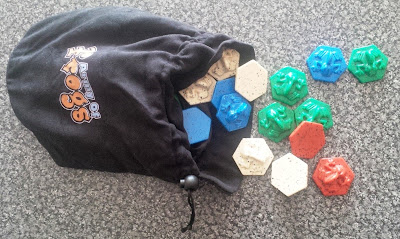 The bag i mentioned is a hefty black drawstring sack emblazoned with the game logo, and while the bag feels sturdy and of good quality, with a plastic base insert to give a flat bottom, the logo isn't that great. It looks a little washed out colour wise and seems like it will wear thin with repeated handling.
Other than the box art and logo on the bag I am quite impressed with the quality of the contents so far. 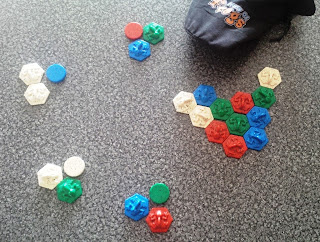 During a players turn you take actions in the following order...

1) Move one of your coloured Frog Stones if possible.
This is done by leaping over other frogs, or rows of frogs, and landing in any empty space other than the one you started from. Players may make multiple jumps in sequence during this phase to reach their desired spot before moving on. If you have no frogs of your colour at this point simply move on to the next phase.

2) Place a Frog Stone.
Players take one of the Frog Stones from their hand and place it on the playing field, the only main rule to obey here is that you may not place one of you own coloured stones into contact with another, this must be done by leaping. You can put anyone else's anywhere you wish.

3) Draw another Frog Stone.
To end the turn rummage in the bag and draw a new stone to replace the one you just played, put it by you player marker and pass on to the next player.

Play continues until one player manages to move all of their frogs currently in the play area into one group of seven or more, all in contact with each other. This is where putting other players coloured pieces down instead of your own becomes useful. If you see someone is within spitting distance of a win, putting one of their pieces down in an awkward place forces them to take more time to get it into contact with the rest and can buy you enough turns to play for a win yourself.

During the first half of our first game my group were playing quite cavalier, not getting too serious, laughing and joking. This didn't last!!! This game can quickly evolve into a strategic battle of wits between players with bluffs and power plays a plenty and watching the other players eyes frantically darting to and fro as they plan their next few moves is surprisingly amusing.

A word of caution also, Keep an eye on the quiet players. We took our attention away from one of our group, Ryan (he asked for a name drop!) and out of nowhere he stole the game. We never saw it coming!

I'll give Army of Frogs 7/10. The pieces are brilliant, the rules concise and the gameplay is wonderfully fun and strategic, but is let down slightly by the box art and the poor logo print on the bag. Minor quibbles only for a great game and if you like strategy games this is certainly worth a punt.