Talisman Prologue... Digital board gaming for the bored. 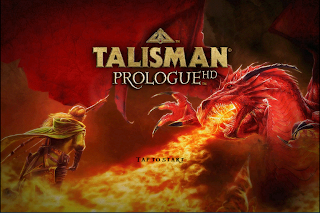 I really can’t make my bloody mind up about this one! This game appeals to one part of me but repels another! The price, theme and gameplay are all good but there is just something……..unknown about it! 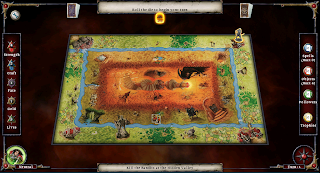 Based on the Games Workshop property published by Fantasy Flight Games, Talisman Prologue is a single player, mission oriented take on the board game set to tide over the digital board gamers until later this year when the full multi player version is released.

Featuring Ten of the Fourteen characters found in the board game (Warrior, Troll, Druid, Wizard, Monk, Assassin, Elf, Dwarf, Priest and Prophetess, missing are the Ghoul, sorceress, thief and Minstrel) each character has five themed missions, on which up to three talismans can be earned depending on how many moves the mission took to complete. Each character has certain skills to aid them in their missions, such as the Warrior being able to roll two dice in combat and choose the best or the Druid replenishing his spell count when landing on the woods, and each characters missions are themed to suit them, adding a narrative to a universe that has, so far, been a simple roll and move affair with no story.
This point I quite like as the lack of story sometimes leaves me wanting a little more from an otherwise enjoyable game.

The interface is clear and easily understood, even for someone not familiar with the system. The tutorial gets its job done quickly and without prattling on for days! 90% of what you need to know is dealt with in the first mission for whichever adventurer you choose first and each of their special abilities are explained just as quickly and painlessly, leaving you free to roll your digital dice and get on ignoring the world again!

The artwork is essentially a digital duplicate of the standard board (and why not? The board is beautiful!) and when you roll your movement dice the board lights up each space you can choose from, from here you can tap on each one and see what effect the space has, if any, and make your choice of destination. Your playing piece is also, simply, a digital representation of the grey plastic miniatures provided by Fantasy Flight.
The gameplay itself is really what you would expect from a single player, roll and move board game experience, that being not for everybody! It isn’t an action packed romp through a lushly animated fantasy land, more a screen tapping version of Talisman for those who can’t persuade their friends to play more often! For fans of the original I can see the appeal of this game, I myself really enjoy it but I can also see the other side of the coin and see how some would find this boring. Compared to other dgital board game experiences, such as Carcassonne(I’ll try and stop mentioning that game some day!) and Settlers of Catan, where the game provides CPU opponents and the option for pass and play multiplayer for you and your friends, Talisman Prologue could seem to some to be a bit of a cop out or cash cow! When, later this year, the full Talisman Digital Edition hits the virtual shelves with its online four player options as well as CPU players, for when social interaction is neither possible or wanted, I can see this game being forgotten for the most part but for now, with its low price tag (£2.99 on the android Play Store and iPhone/iPad) it’s a good little distraction.

I wouldn’t recommend this game to anyone, if you are a hardcore Talisman fan or a fan of solo board/card gaming then this is worth a try, especially for the price, but if you like action or multiplayer, be they real or virtual, then I would say give this game a miss.
For me alone I would give this a 6/10, it’s a decent filler until the full game is released but I wouldn’t have paid any more for it!