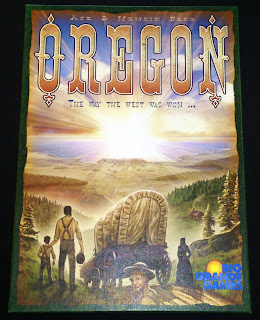 Published by Rio Grande Games and designed by Henrik and Ase Berg, Oregon was a random purchase from a discount store that quickly found itself becoming a regular feature on our table.

Having the pioneer era of American history as a setting initially drew an emphatic ‘meh’ from me but the art on the box is really nice, featuring a wagon train overlooking a rolling vista of unsettled America and bearing the legend ‘Oregon – The way the west was won…’. The quality of the box is equal to that of Carcassonne. It feels very sturdy and the inside of the box comes with an insert that divides the internal cavity into four sections for a less jumbled storage area. 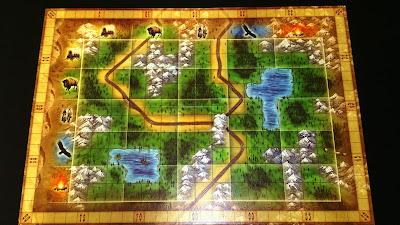 The board is a great size and features a segmented board with four different types of space, grasslands, railroads, mountains and water. Across the top and left side of the board are symbols that work as coordinates (more on this in a few) these symbols are a wagon, a buffalo, some settlers, an eagle and a campfire. Finally around the outer edge there is the regular euro game style score tracker that goes from 1 – 100. 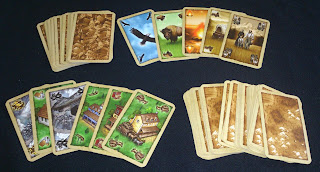 The cards are half sized, with a nice vinyl coating, and come in two flavours. Location cards have the same symbols as the coordinates on the board and the building cards which represent the buildings and structure tiles. 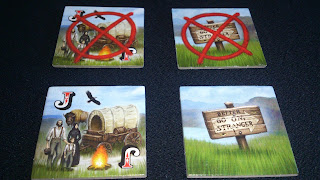 The structure tiles are made from good quality card and show the building on them and a point value for each. The buildings are a mall, a port, a store, a church/chapel, a train station, a post office, and two mines, gold and coal, which do not have point values but reward the player with a random value token, lower value for coal and higher for gold. The tokens are really good, printed centrally and punched very well, in fact I actually shook half of them lose without punching them out, such was the quality of the cutting done for boxing. 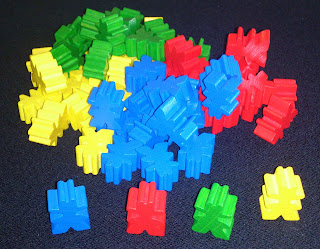 The player pieces are essentially cowboy meeple (dubbed cowboy-ples by our group!), they are little wooden fellas molded as silhouettes of people with apparently massive Stetson hats on their little wooden heads, and these come in four flavours, red, blue, yellow and green.
The players also have two extra tokens each to use, one is a joker token, which can be used instead of a location card if you need a specific one but don’t have one, and an extra turn token which the player can use to immediately take another go. These can only be used once per turn and can only be replenished by scoring on specific buildings.

The pieces and components for this game are simple but brilliant at the same time, much like Carcassonne part of the appeal is in the stripped down, simple presentation. It isn’t bogged down by a box full of gubbins and fluff like a lot of games, particularly American games.

To begin the game each player is furnished with a handful of meeple, one of which is kept aside to act as a score tracker on the board, and four cards, three location cards and one building cards. 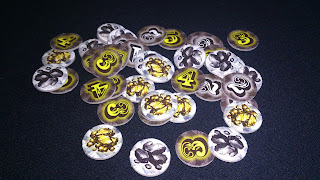 Scoring on mines gives the player a random token instead of an instant score. These are kept secret until the end of the game and many times our games have been won by someone revealing a stack of high scoring tokens at the end and storming into the lead from the back. I just wish once or twice that it could have been me! I’m not the luckiest Oregon player at our table.

It isn’t the longest of games, usually clocking in at around the 45 minute mark for the average game, adding 10 – 15 for teaching any new players as the rules are easy enough to grasp mid game with only the briefest of pre game run-throughs.
The pieces are good but not astounding and I had a little problem with a small amount of board warping, but this is more indicative of the storage by the aforementioned discount store and not the manufacturers.
I will give Oregon 7/10. It fits well with a full group of four but it loses something when you play with less. I couldn’t say that I would have paid full price for it but as a random find for less than £10 it is a great game to break up a day of more in depth, story driven games.
Posted by Beard Plays Games at 06:30