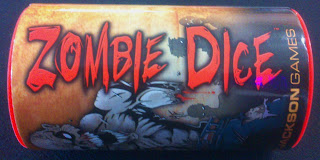 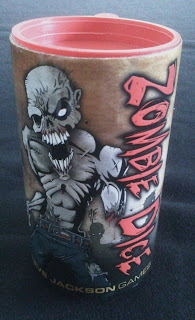 Zombie Dice, by Steve Jackson Games, is a push your luck dice rolling game in which the players are zombies attempting to munch down on some delicious, juicy brains! The only issue is that the owners of said brains aren’t too keen on donating to your lunch plans and are busy either running away or bearing shotguns to blow your rotting head from your zombie shoulders! The first player to gather and chew on 13 brains wins, but only if the dice are lucky for you!

During a players turn you take three dice at random from the tube (or dice bag which we have found better, especially for those such as myself with dinner plate hands and sausage fingers!!!) and roll them. For each brain rolled the player puts those dice aside until the end of the turn, feet are kept and rolled again as the victim has run out of reach..... for now, and shotgun blasts are kept along with the brains. Any runners are gathered up and a new dice are taken to make up a hand of three and rolled again, and so on and so on until either three gunshots are collected whereby your head has been blown clean off and all brains rolled that turn are lost, the player decides to stop rolling and all brains are added to the players total or a player reaches 13 brains and stops thereby winning the game.
This is where the “push your luck” element of the game comes in. When faced with needing only two brains to win, but having two gunshots already, do you take the chance and roll again risking a shot and losing any brains not yet scored or do you take your brains and hope none of the other players get a lucky break?

This is a brilliant filler game and recommended for a cool down period between bigger games on a full gaming day, or simply as a quick gaming burst when time doesn’t allow larger games.
I give Zombie Dice a 10/10. For what it is, a filler game, it delivers gameplay and replay value in spades and anyone can learn it in seconds, so much so that both of my children have played and loved it!

This small expansion adds three dice to Zombie dice as replacements for the regular dice and come in two different flavours.....

Part 1 – Big Summer Action Movie.
Two new dice are added in place of two of the yellow dice, the Hunk is a new white dice featuring a double brain in place of a single and a double shot in place of a single.
The Hottie is a pink dice which has three feet (in heels) one shot and one brain, making her hard to catch than a regular victim.

The unique rule for these two victims is that if you have caught one of them and the other shoots you they can rescue each other and return to the bag!

Part 2 – Santa meets the Zombies.
Replacing a green dice this part adds a solid red die with new icons.
The dice represents Mr Claus himself and he is just as much a victim as any other person in the game, but he may survive yet as he also brings presents!
Along with a gunshot, feet and a brain (Santa’s own head candy!) we have a double brain as Santa has brought you a yummy double helping, an American football helmet making you a “Tough Zombie” which enables you to withstand an extra gunshot before falling and an energy drink which makes you a “Fast Zombie” and enabling you to convert any running feet into brains as they aren’t quite fast enough to avoid you now.

Out of the two expansions the “Santa meets the Zombies” is the better of the two as it adds more to the game as the hero and the hottie do but all in all they are a fantastic addition to a brilliant game and if you have, you need the other! The beard so declares!!
Posted by Beard Plays Games at 03:42