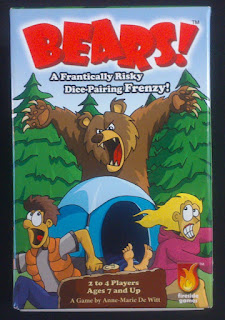 Being a dice game I wasn’t expecting a large box and I wasn’t disappointed , the box is 5 inches tall by just over 3 inches square and the top slides down over the inner section revealing artwork that continues from the outer cover depicting a cartoon image of a rather disgruntled bear looming over a campsite while the occupants run for their lives.

The rules are presented on a small six-fold leaflet and are very simple to follow and are accompanied by some simple diagrams and a few images for added flavour.

Also included are four points reference cards, one for each player, showing the dice combo’s the players are to play for and the scores for each. These being:
-Bear/Shotgun = 1 point
-Tent/runner = 2 points
-Tent/sleeping bag = 5 point unless there are bears remaining in the camp site in which case they are -2 points.

Now we’re past the crust let’s get to the filling, the dice.
The forty die are nicely made and have a good feel to them if a little light, the twenty player die are black with two each of three icons on them, a sleeping bag, a shotgun and a running person. The white camp die, which have four tent icons and two bear icons, are equally well made and look great in contrast to the black player die. 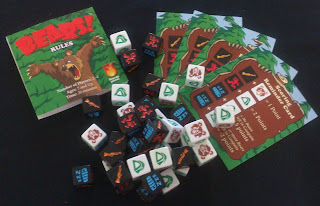 Each player takes five of the black player die and the camp is made up of five camp die per player, the camp dice are rolled in the centre of the group and then the players roll their hands before a free for all ensues as the players match up their dice with a camp dice one at a time until only one kind, either bears or tents, remains in the camp, at which time the rules compel players to yell “BEARS!” to signal the end the round and the scoring is worked out, all remaining camp dice are left. During this free for all, players are permitted to reroll their hand as often as they wish but this is inadvisable most of the time as the fast paced structure of the game leaves little time for this. One issue is that the camp dice can easily be knocked during the grab for pairs which can alter the roll or just scatter them across the table if someone is particularly ham fisted. 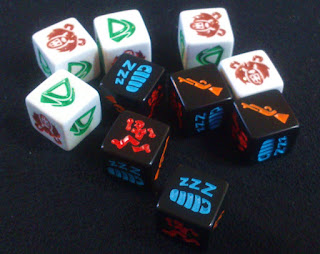 Overall I give this game 6/10, the components are nice but the gameplay is little more than a scramble with no strategy involved, it simply boils down to random chance and who has the quickest hands.
Posted by Beard Plays Games at 05:30