If Wishes Were Fishes.... You wouldn't find these at the supermarket!

If Wishes Were Fishes by Rio Grande Games 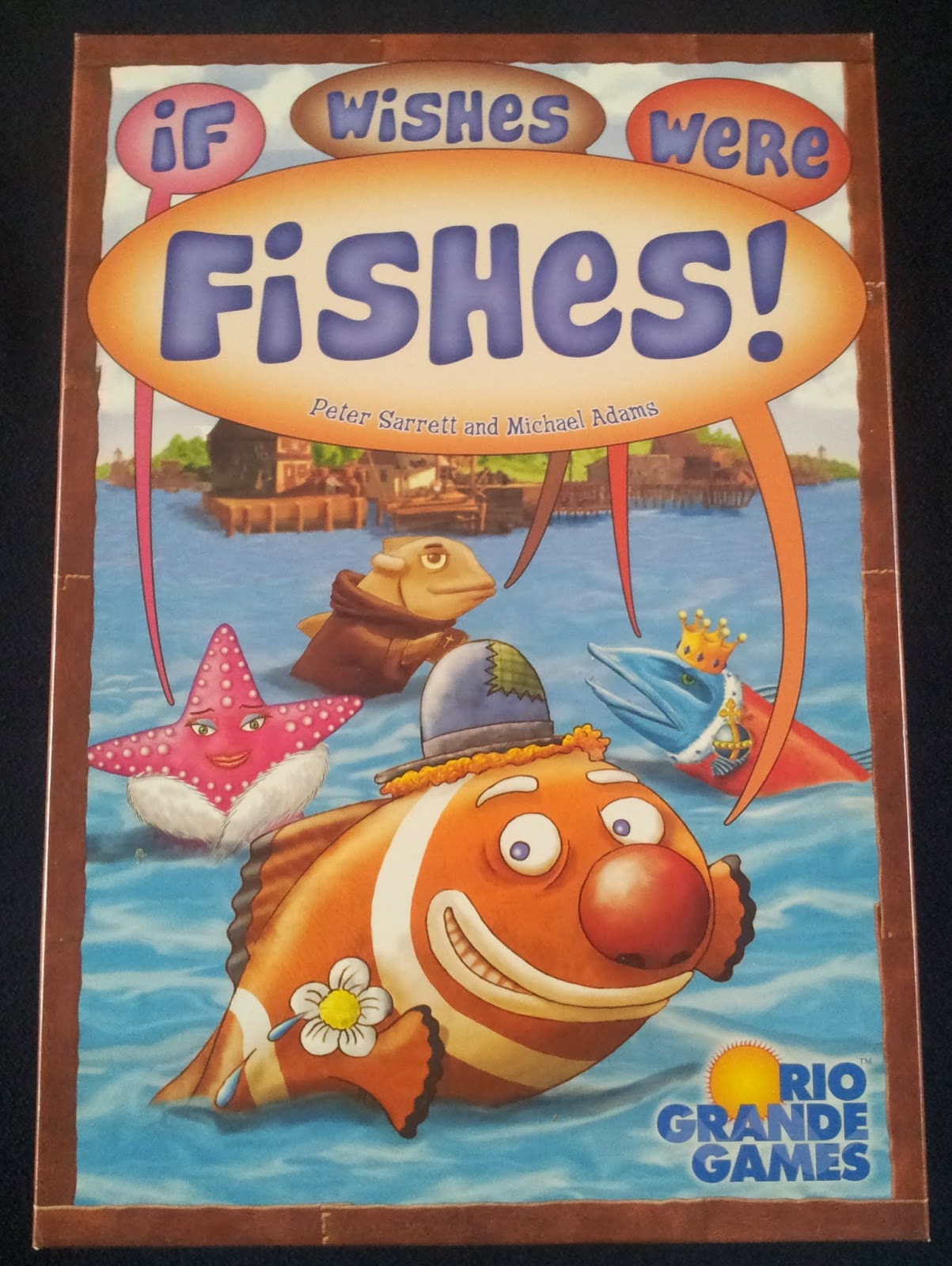 Published in 2007 by Rio Grande Games, and designed by Michael Adams and Pater Sarrett, If Wishes Were Fishes is a hand management game where the 2-5 players are competing to be the greatest fisherman/woman and bring the biggest catch to the market.
The game itself is squarely in my Fiancées portion of the collection as I don’t really like the artwork throughout the game and that detracts from the experience for me when I don’t like what I’m looking at for over an hour!
The board and box are well made, the box itself has one of the best inserts I have seen, taking the shape of a fishing boat with two foot wells giving ample room to store all of the components. The board features a bird’s eye view of the fish market which shows a stall for each of the different species of fish you can catch, a rubbish dump beside the market (hygienic) and the Euro standard of a score tracker around the perimeter.

For the player pieces we first have the markers used to track the score and show what you’ve sold. These are small wooden fish-meeple. These are pretty good quality as most wooden components tend to be, can’t really go wrong with some wood (insert innuendo at your leisure!) There are also five traditionally shaped Meeple in white (x1) grey (x2 and black (x2) these are the ‘Buyers’ and confer a bonus to the market stalls when selling fish.

The cards used to show what fish you have in your boat are pretty good quality and feature the eponymous fish and the odd varieties they come in. The names are all normal fish but they are more literal than their real world counterparts, for example, the Monkfish is wearing a monks Habit and sporting the Tonsure haircut, the Angel fish comes replete with flowing robes, wings and a halo. Most of the fish also have an icon showing what ‘wish’ they can grant but more on that later. There are five different coloured boat cards for the players to begin with and four ‘market limit’ cards also which essentially time the game (later).

With the cards I can easily see that this game is geared more to appeal to a younger audience but with an age rating on the box at 10+ I can’t help but feel they’ve put a rather small margin for said appeal on the game as much older and the style will become less appealing to the average child. 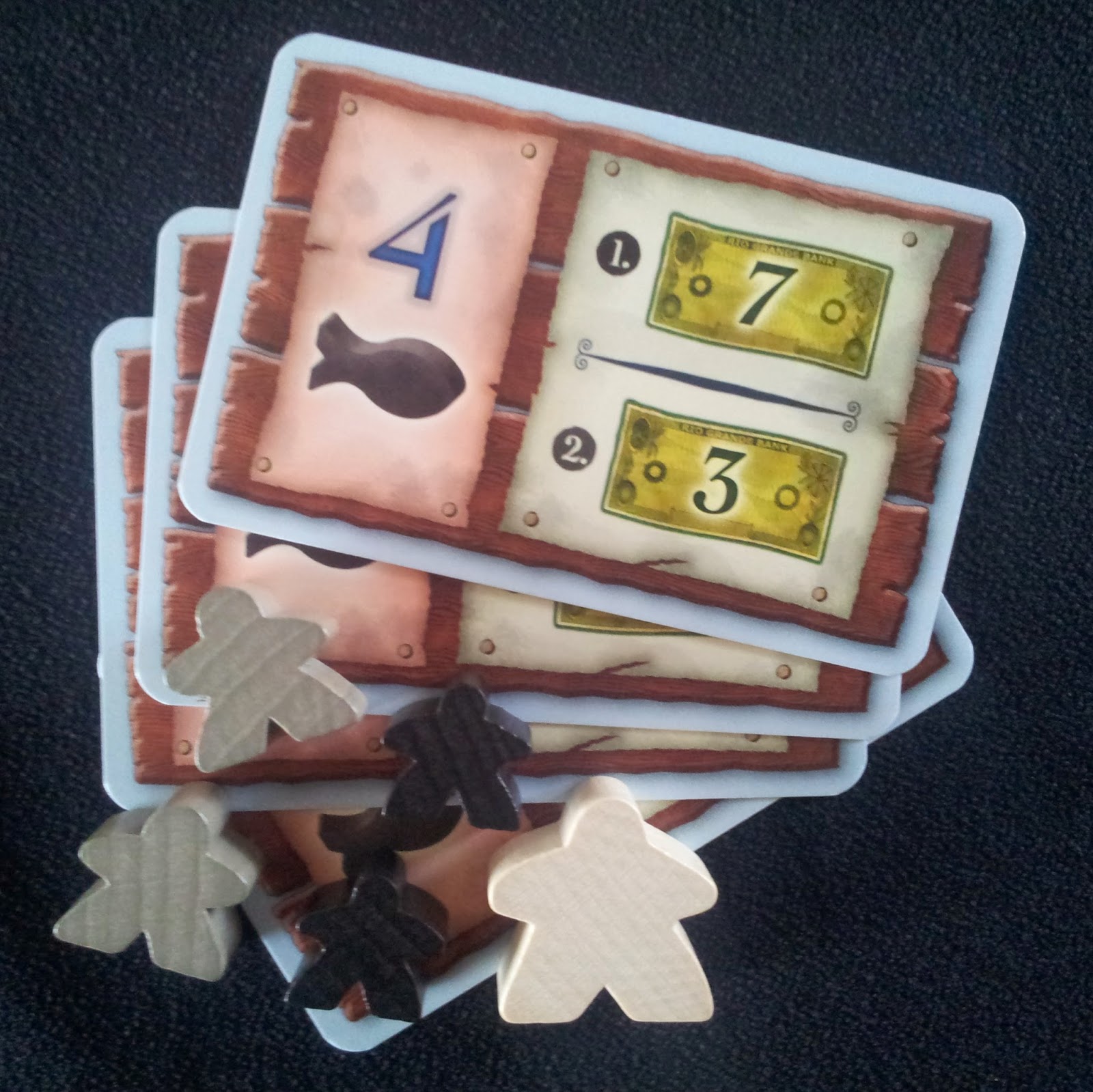 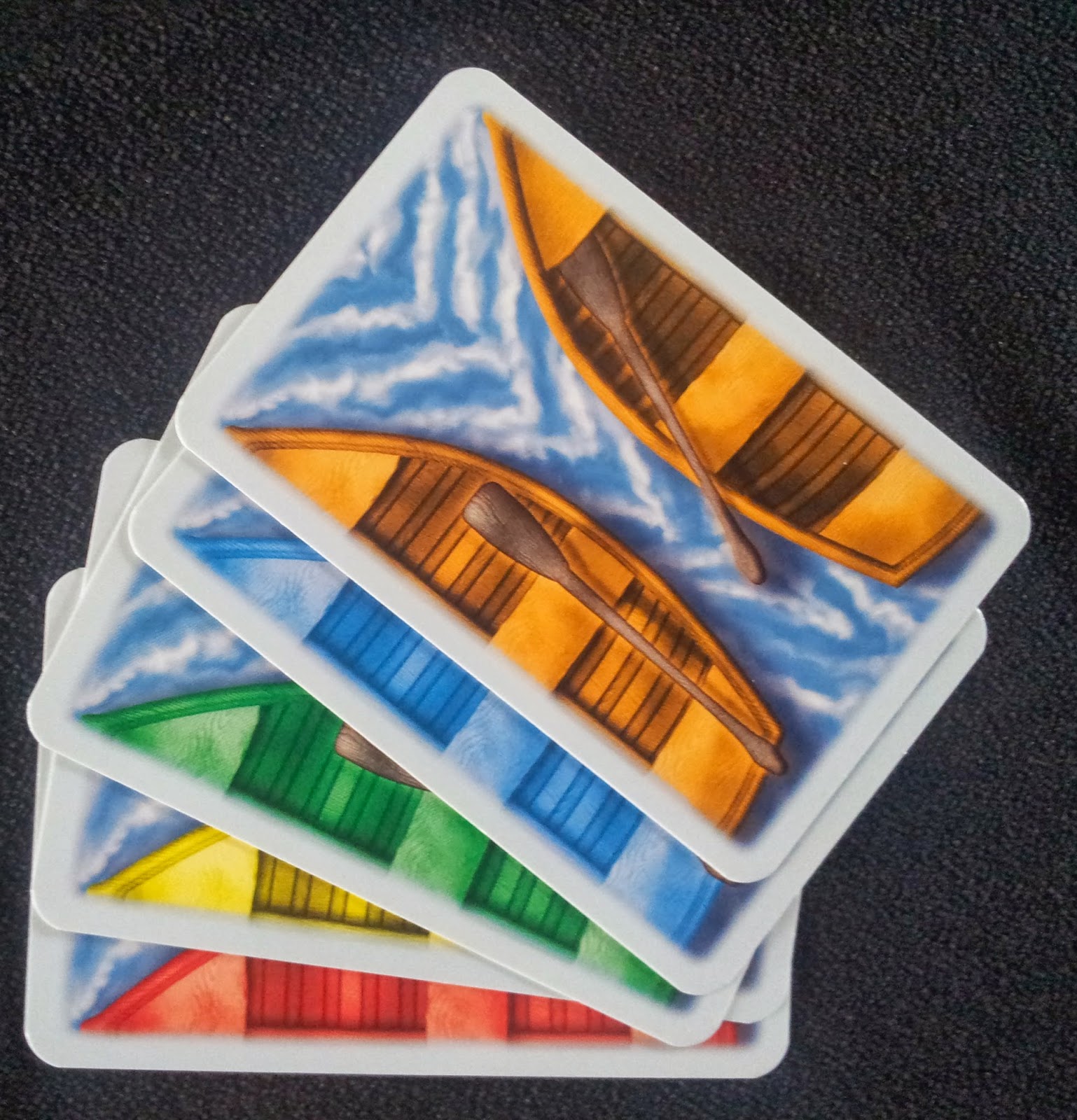 Finally comes the oddest part of the contents. The currency in which you deal to get the fish you want is worms. Big, rubbery, odd feeling worms. These will invariably garner a chuckle from a player the first time they see them, even a squeal or two from those inclined to do so and ALL players will find themselves playing with them for the entirety of the game. Twanging them, wiggling them, squishing them, stretching them, It’s almost worth playing the game just to fiddle around with them!
They are a very weird thing to put in though. It feels as though someone at the office said “This game isn’t silly enough...... Make something out of purple rubber, that’ll do it!” It certainly adds to the whimsical appeal of the game though I will admit.


Gameplay
This is where the game puts in some legwork and redeems itself in my eyes.
In the set up each player is furnished with a card showing two boats in their colour, each boat capable of holding one fish, and six worms for fishing. The fish cards are shuffled and four cards are dealt out in a line leading away from the deck. This forms the ocean, the card furthest from the deck being the shallows and closest the deep sea.
On a players turn they may take ONE of the following actions:

1)      Take a fish from the ocean and put it in one of their boat.
To do this they can take one of the four fish visible in the ocean, the first being free and having to pay one worm to each fish they pass over if they wish to take one from deeper afield. The ocean is then moved up and a new fish is dealt into the deep ocean. If you take a fish with worms on the card, paid by previous players skipping said fish, you keep the worms. One way to gain new worms if you find yourself running low.

2)      Take a fish from the ocean and throw it back.
This may sound like a waste but as I mentioned before, most of the fish have a wish they can grant. Freeing a fish, to the haven of the discard pile, allows you to use the wish and there are quite a few different ones to use from selling multiple fish at the same time (very useful as you can normally only sell one) gaining an extra boat, awarding you cash equal to your worm stock and moving the ‘buyers’ around the markets.

3)      Sell a single fish to the market.
If you do not want to take a fish from the ocean, nor have any use for a wish, you can take one fish from your haul and sell it to the relevant market stall to score some cash.
Each market has a base value of two ‘money’ (there isn’t a defined currency, just notes with numbers!) so the managing of the Buyers locations comes in here. The small black buyers confer a +1to the price of each fish sold to a market they are stood on, grey a +2 and white a +3. It is possible, through clever use of wishes, to stack multiple buyers on one market stall to greatly inflate the value of the fish, this combined with a ‘sell multiple fish’ wish can really give you a massive cash injection!

For each fish sold to a market the selling player places one of their wooden fish markers on the stall to show the total that market has bought. Once a stall has reached the topmost amount shown on the ‘Market Limit’ cards, which start at 4 fish then 5,6 and finally 7, that market is closed and the players with the two highest amounts of fish there get a monetary bonus. Any other fish sold there above the limit are thrown n the rubbish pile. Starting with a lower amount means that one stall WILL close quite soon into the game, I really like this as it means you have to be careful what fish you catch and sell. Too any in the rubbish pile and it’s game over! And not all of the fish have wishes to grant meaning sometimes selling to a closed market is necessary if you don’t want to permanently clog up one of your boats!

The game ends when either all four Market Limit thresholds have been met, in which case the player with the most money wins, simple! Or the Rubbish pile has ten or more fish present. If this happens the top Market limit card is applied to the pile instead of a market stall, but the players LOSE the bonuses instead of gain them, meaning the players with the two highest amounts of fish thrown away will take a pretty hefty hit to their score. The player with the highest score after this deficit is applied is the winner. 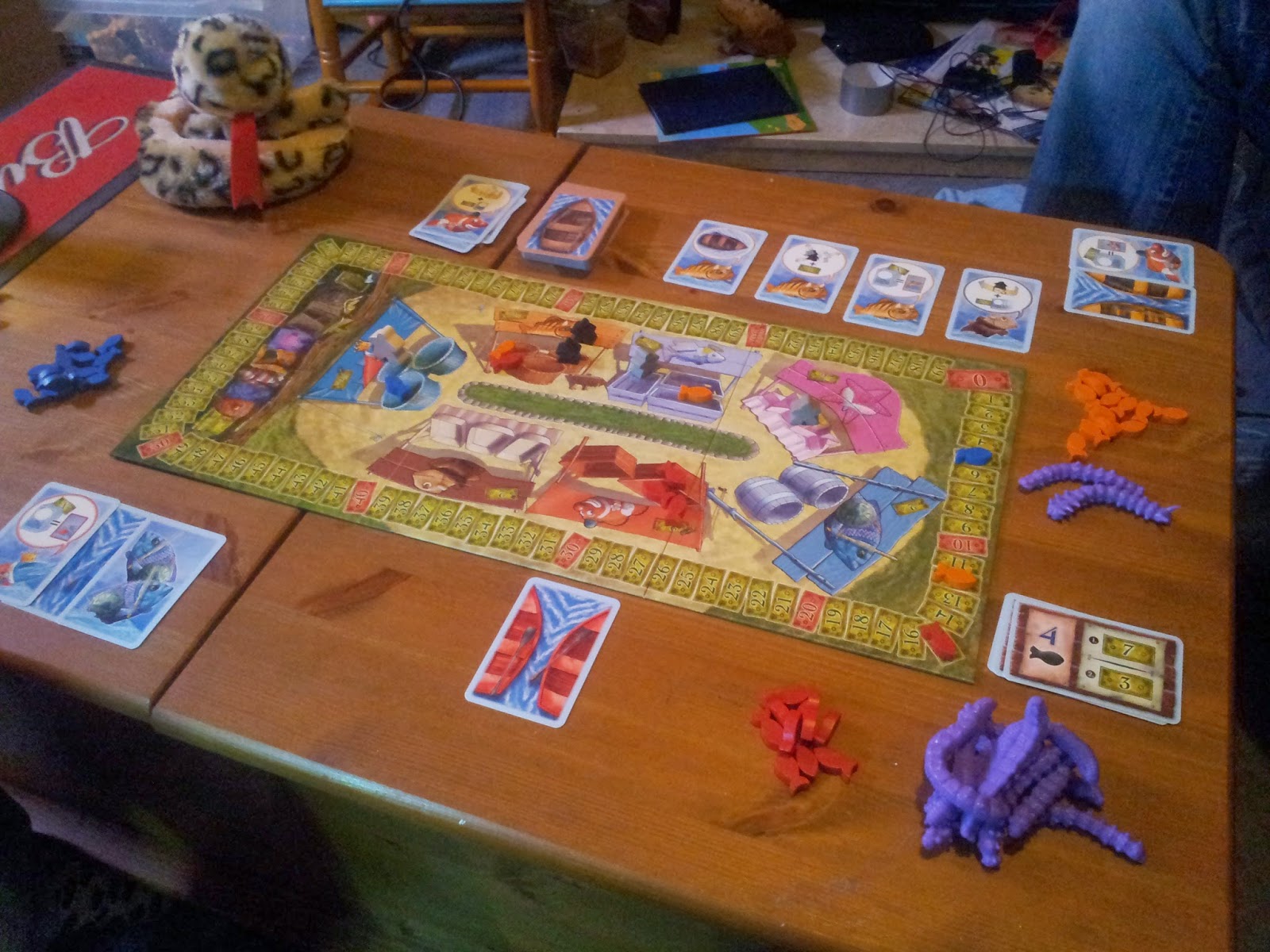 As I said earlier, the game redeems itself somewhat with its gameplay. The tactical choices used in deciding when to use a wish, selling a boat full, chipping away a single fish at a time and the use of the worms for better fish cards make this a pretty good hand management game and surprisingly deep at times. Forward thinking is key for planning your sales.
I still can’t get past the look though! I really dislike the art direction.
I give If Wishes Were Fishes 5/10. Recommended mainly for groups with a few casual gamers in the mix as it’s one that anyone can get into and enjoy, just not really one for the hardcore heavy gamer.

As a side note, for those put off, as I, by the art, it may be worth looking at a game called Morels by Two Lantern Games. It features a similar play style and gameplay mechanic but is themed around gathering mushrooms! Again, not one for the hardcore but I prefer the look of that one!
Posted by Beard Plays Games at 03:11