Gosu.... Who's the better goblin-y warlord? 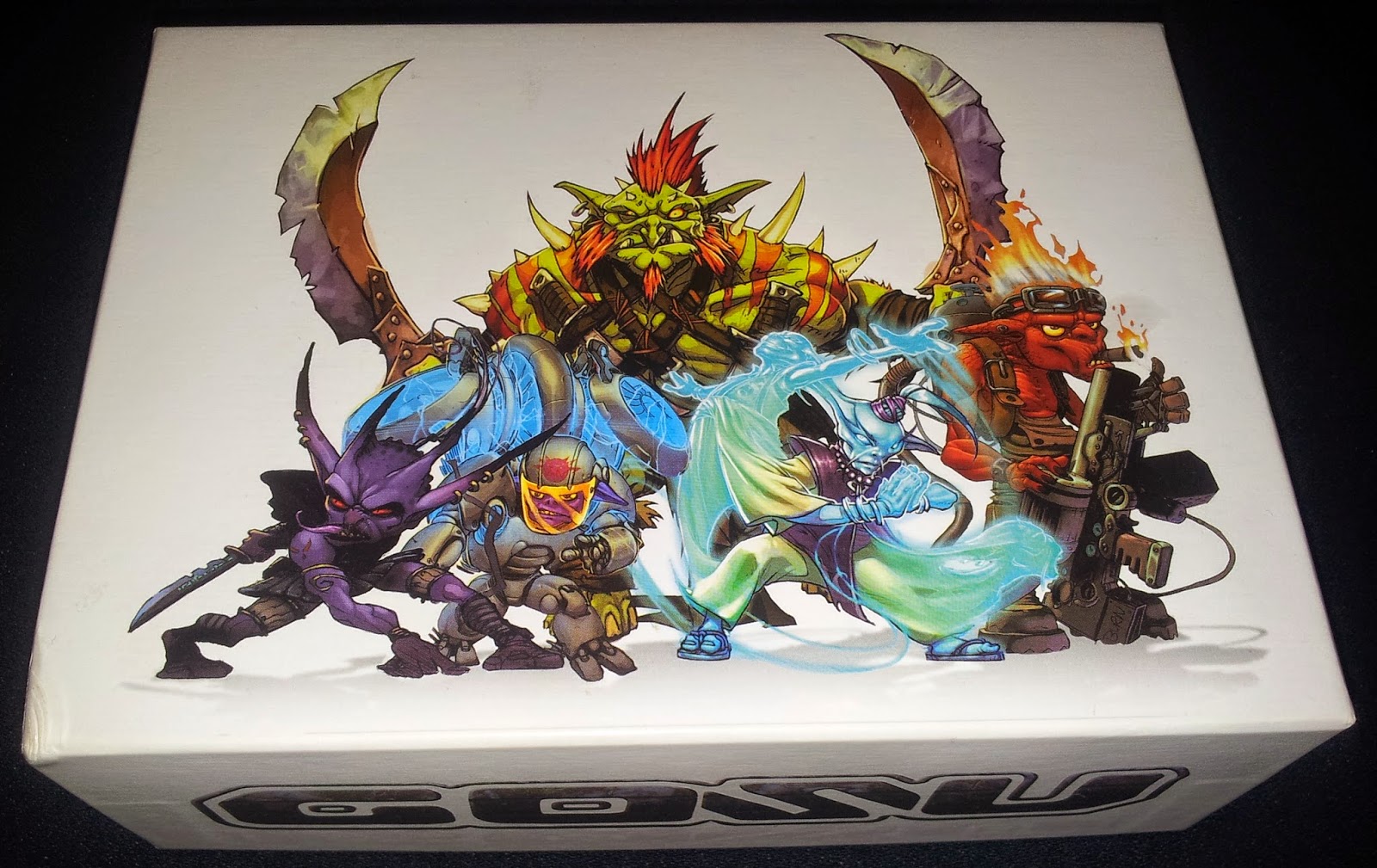 Released in 2010, by French publisher Moonster Games, and designed by Kim Sato, Gosu is a 2-4 player hand management card game where players take part in Great Battles to determine who the greatest Goblin warlord is!

From the first glance I liked this game. Starting with the box and its minimal approach to cover art. Lots of white, blank space here and sometimes this can look lazy or overly pretentious but here it sells the game brilliantly.
The top of the box shows a cadre of different goblins, showing off some of the artwork to be found within. The sides feature just the name on the long side and the publisher logo and age/player info on the short ends. The back is fairly text heavy with a tri-lingual fluff paragraph, contents list and a couple of card images. The minimalist style really helps to make the box pop in a collection and it stands out on the shelf. 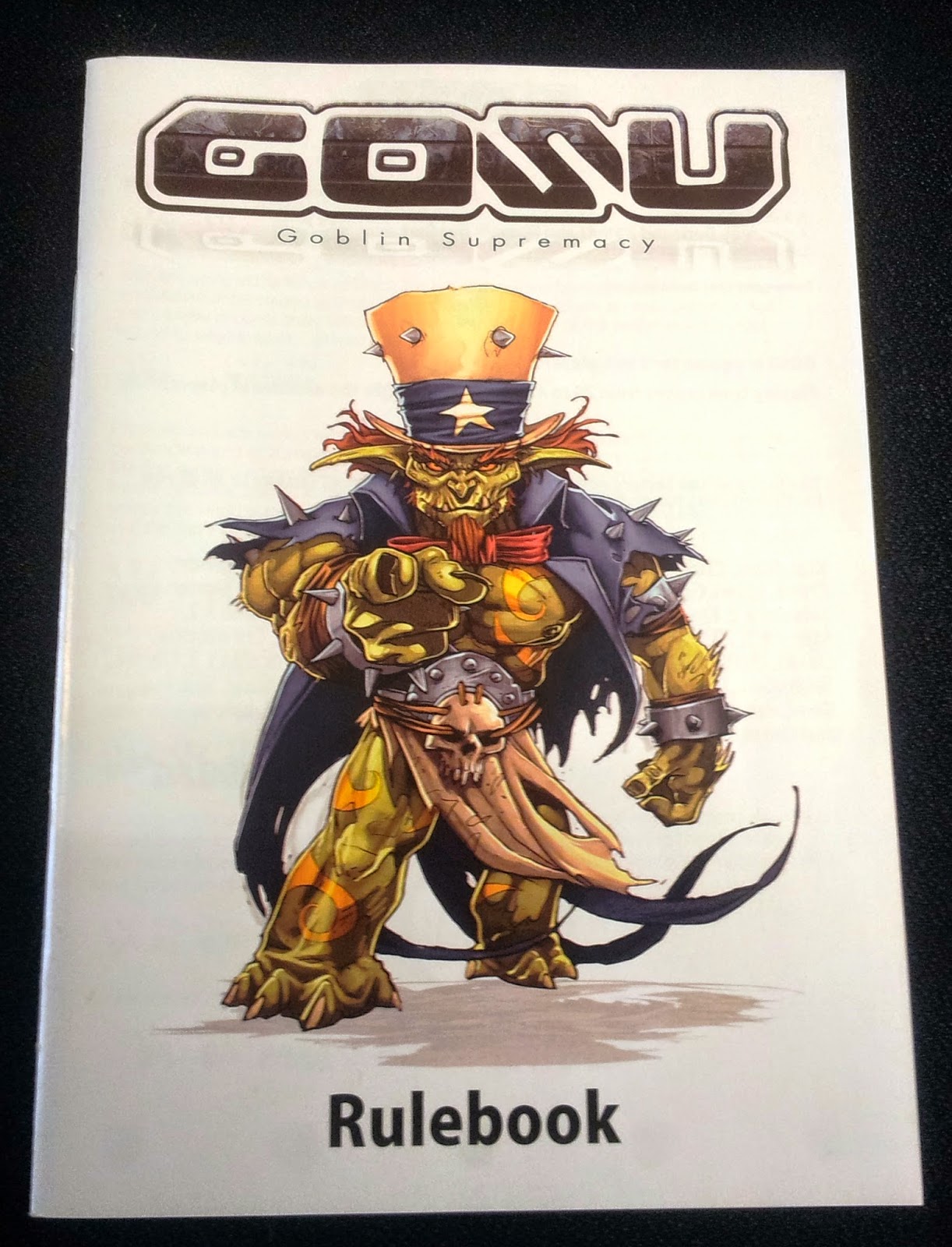 The rulebook is really well done with an easy to follow, step by step guide to goblin based warfare. The tokens, 8 activation, 9 victory and 1 advantage token (used mainly for breaking ties and going first in the draw), are printed on some good quality card stock with an ‘okay’ linen finish. The printing and punching are really good. Nice and central and they punched out easily with no mess or tearing. 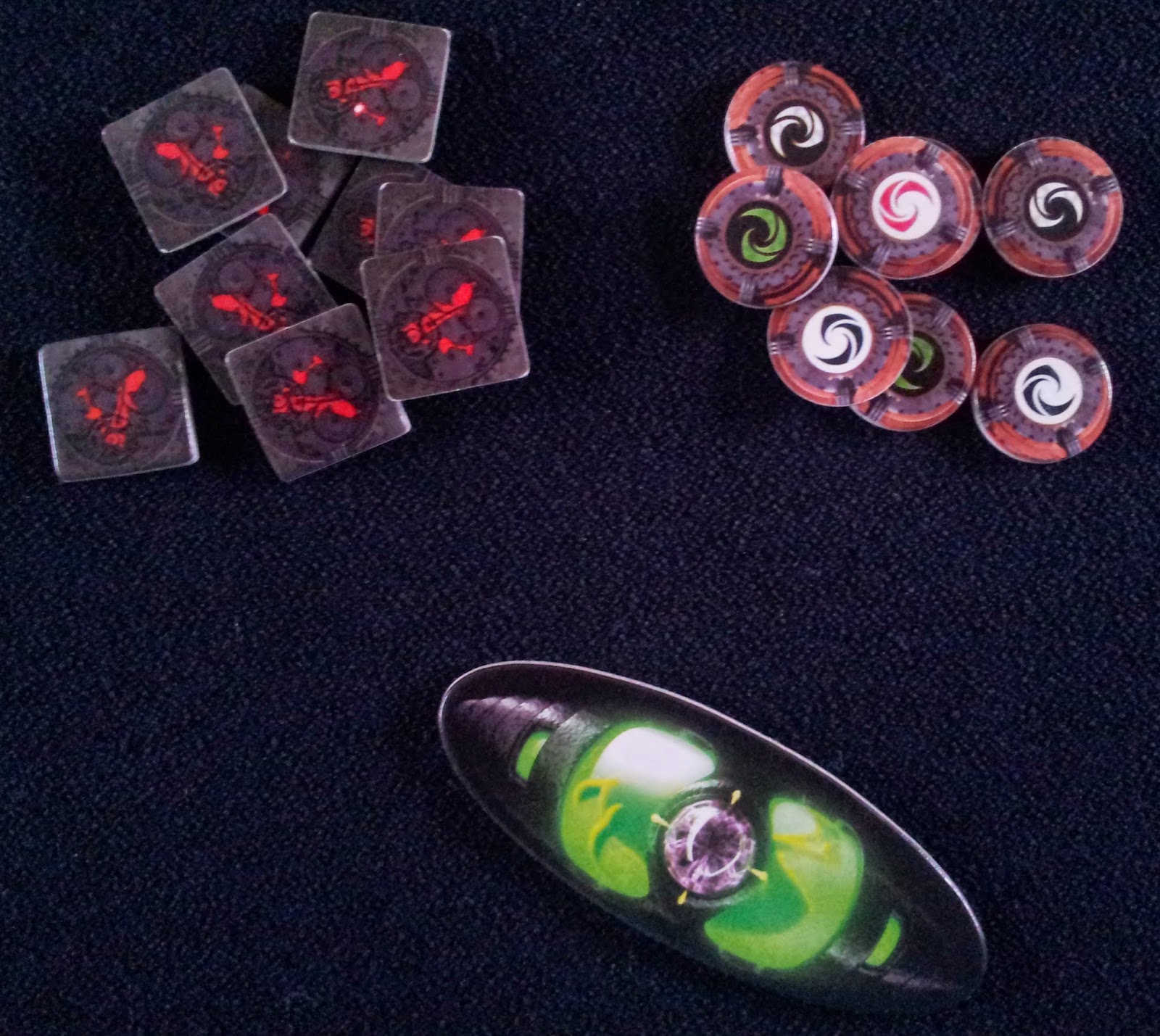 The 100 goblin cards are the real meat and gravy of this cardboard banquet, and what a tasty bunch they are!
Comparable in quality to almost any card game out at the moment, the card backs have a metallic appearance (although not a metallic finish as many a card gamer will know of the horrendous warping this leads to!) with the logo and a strange goblin faced door knocker thing. 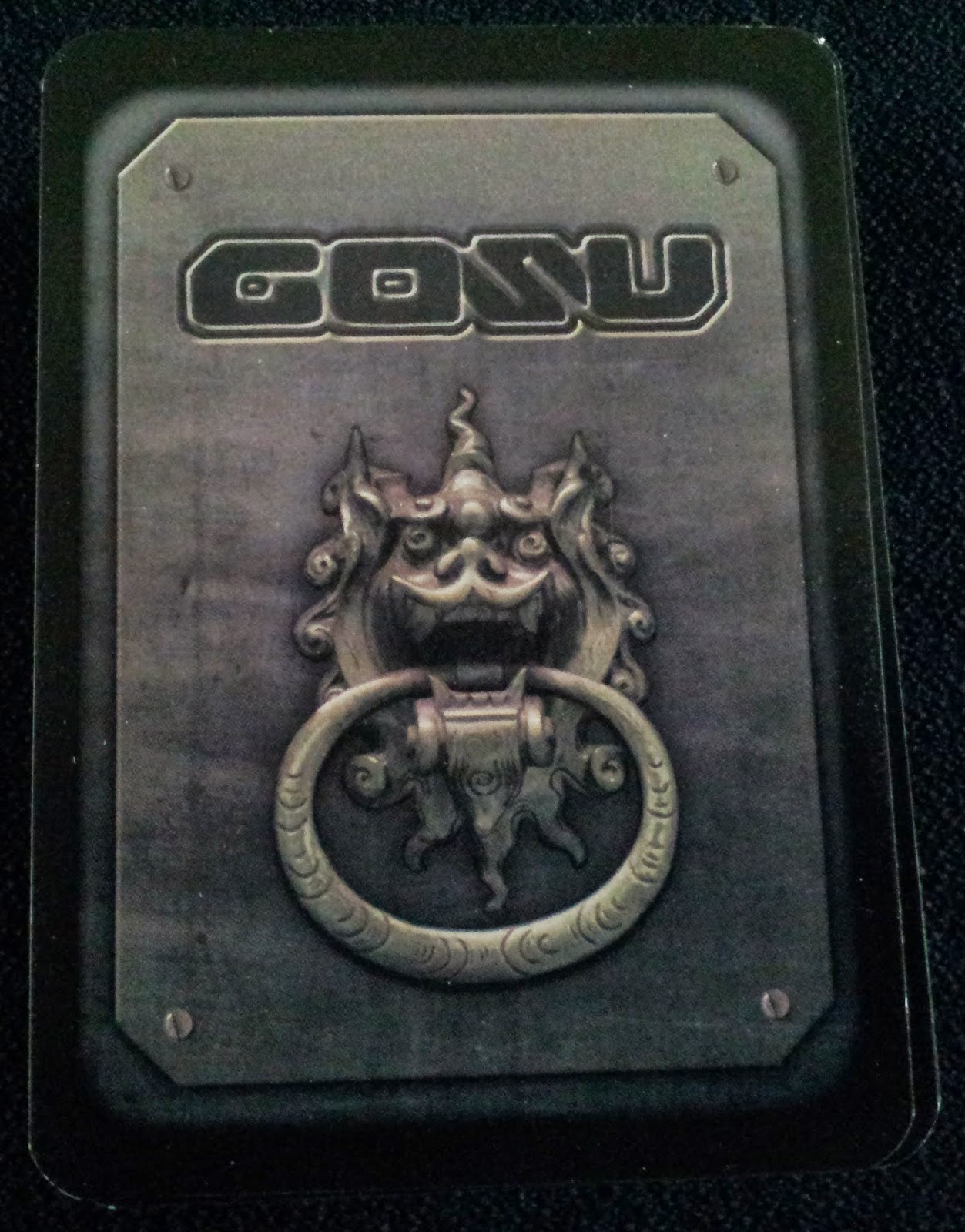 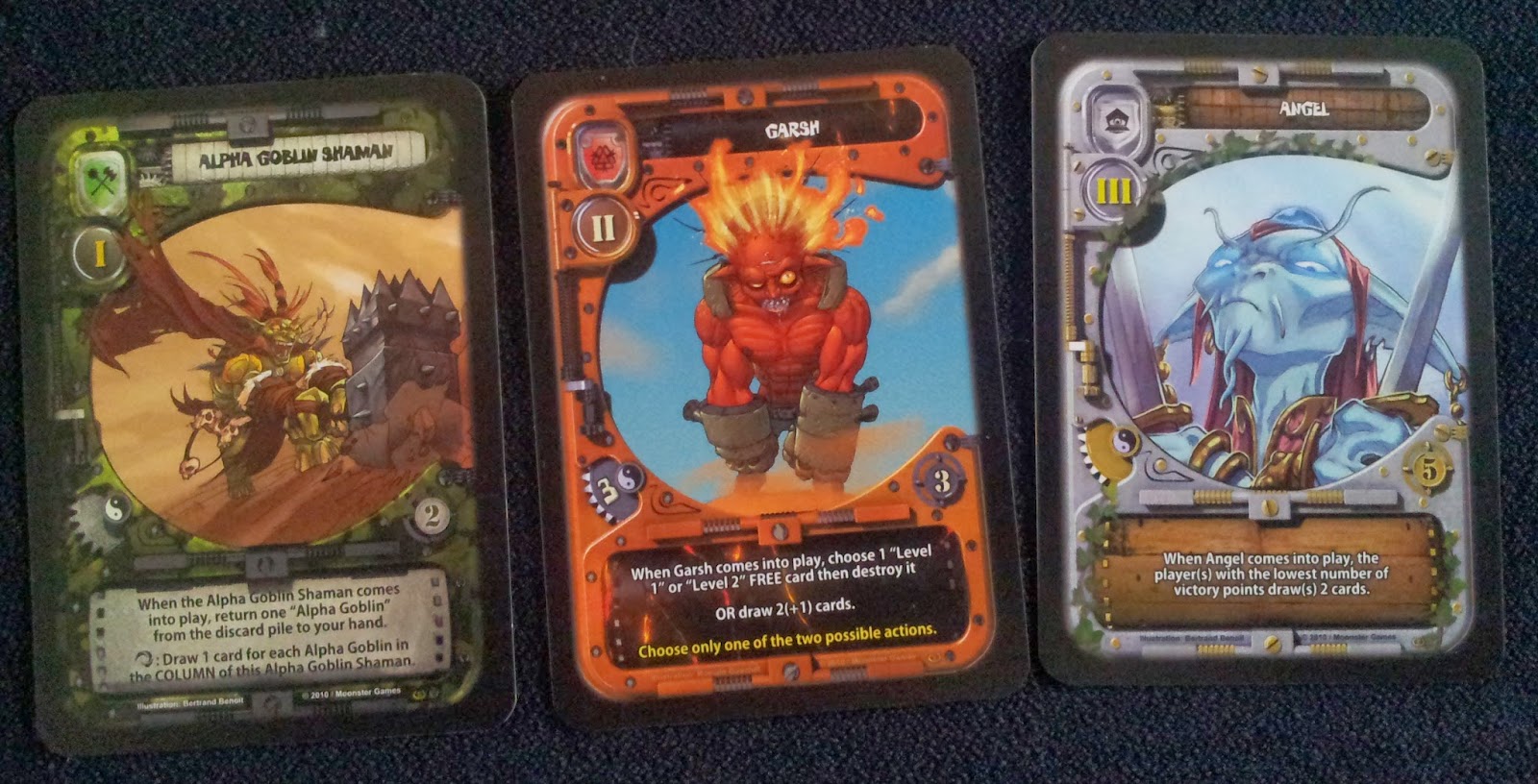 The goblin groups all have a distinctive style and the differing colours between the groups make for an attractive game once on the table. No muted colours here.
The goblins themselves are drawn brilliantly. The art, handled by Bertrand Benoit, Romain Gaschet and Ian Parovel, shows the goblin hordes with unique images, some amusing especially in the case of the cigar chomping, petrol head Fire goblins, to the serene, meditative Ancient Goblins, warlike Alphas, high tech Mekas and the creepy Dark Goblins.
The Bakutos (Lv.1) all have pretty basic names like ‘Dark Goblin Thief’ or ‘Alpha Goblin Shaman’ but the Heroes and Ozekis all have names, and titles in some cases. I really like the fact they went for a completely unique deck with no repetition as that would have been a quick way to bolster the ranks, but the effort in giving us 100 different goblins makes the game all the better for me.

The components in Gosu are great. I think the box could have easily been smaller. I have all of them barring the rule book in an Ultra Pro Deckbox which takes up barely 40% of the available space. 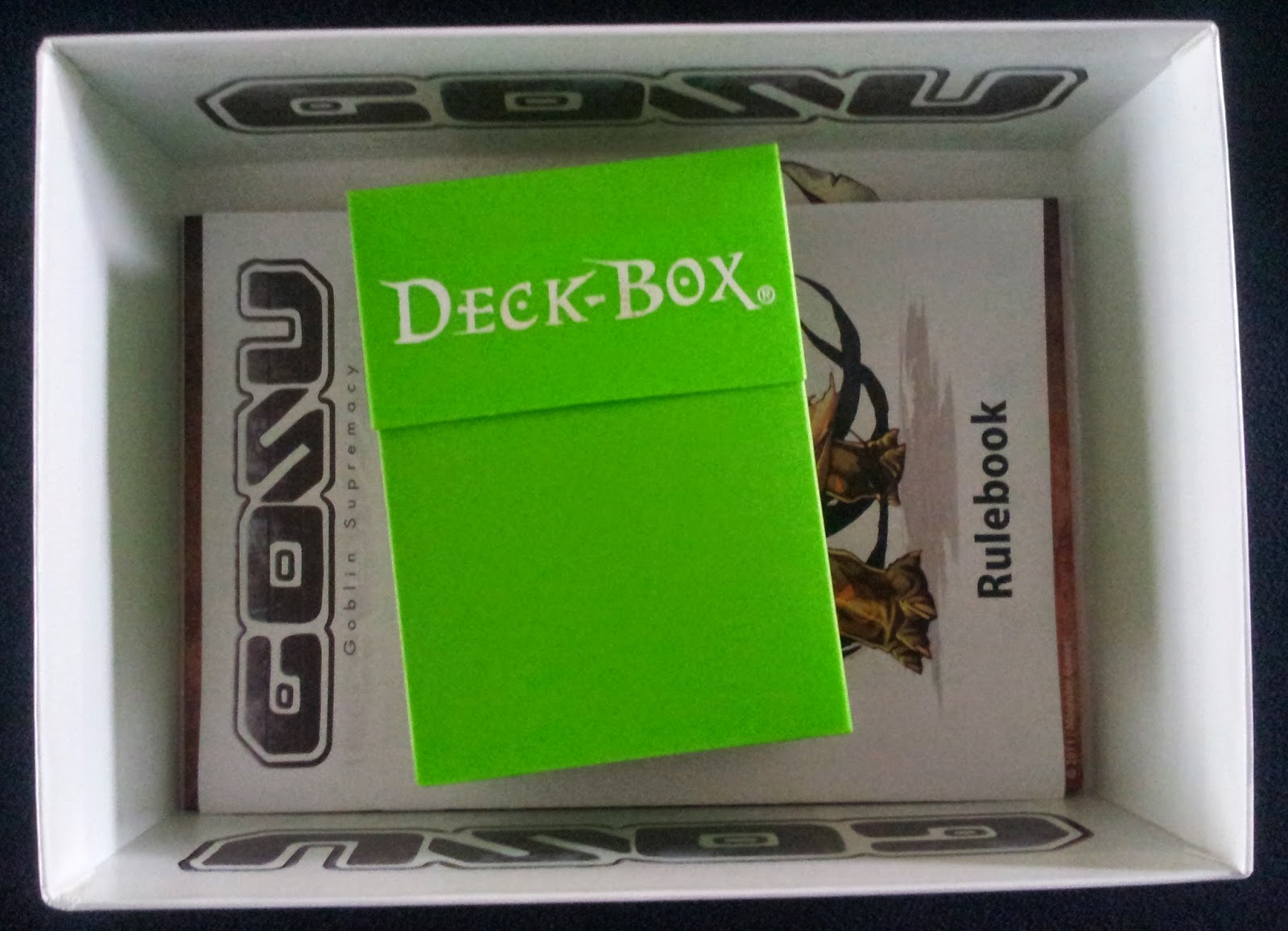 Shrink the rules and the box could easily have been made more compact. The fact that I really like the rulebook though renders me a little conflicted in this case! Still all great though.

All 100 cards are shuffled together to form one deck from which all players will draw a hand of seven cards. These are the only free cards you will get!
On a players turn they can take the following actions:
1)      Play a Goblin (and use its power if possible)
Each players area is a 5x3 grid in front of them, the first row is for Bakutos, the second for Heroes and the third row (the furthest forward) is for Ozekis. Each player forms their army on this grid.
The first level one goblin you play is free, as are any of the same colour that follow, but for every goblin of a new colour you play you must discard 2 cards from your hand. Heroes and Ozekis require at least one goblin of the same colour be present in the previous layer and as a result they are free to play. Having an assortment of goblins is vital to success so you’ll find yourself discarding quite a lot of cards to build your primary row in the first few turns. 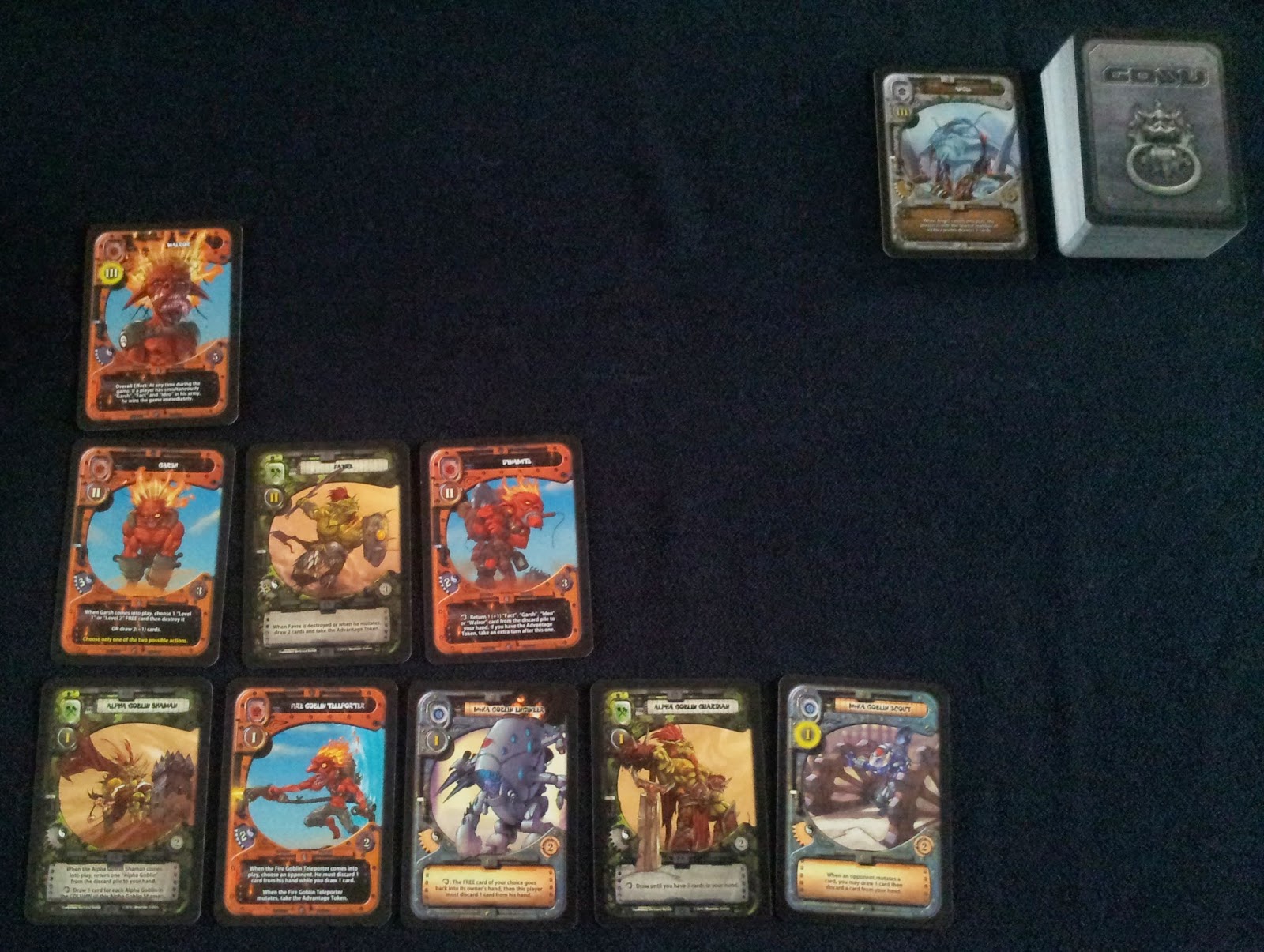 2)      Mutate a Goblin
Some goblins have a special icon, coupled with a number, and this indicates that if you discard the indicated number of cards you may mutate it into any other goblin of the same level. This is a nifty way around the limitation of having to have a matching clan colour in the prior level as you can mutate freely.

3)      Spend activation tokens for cards
Players can either pay one of their two activation tokens for one card from the deck or both of them for three cards. Aside from a few card effects this is the only way to gain new cards making your choices all the more important with the deliberate choking of resources.

4)      Spend an activation token to activate a goblins power
Some goblins have powers on their cards that can only be used by spending a token as opposed to being used when the card is placed. These powers tend to be more powerful or more useful than their free counterparts so you are presented with a choice. New cards? Or kicking some ass with activation powers?

5)      Pass
If you choose to pass the round is over for you and you now wait for the other players to finish and pass themselves before moving on to the Great Battle.
‘The Great Battle’
Once all the players have finished forming their forces they face off in the Great Battle. Each player totals the values of their entire force, Bakutos are worth 1 point each, Heroes 2 points and Ozekis 5 points each giving a complete 5x3 army a value of 50 points worth of slobbering gobo fury!
The victor (most points) takes a victory token, any ties go in favour of the owner of the Advantage token. Each player then replenishes their two activation tokens and a new round begins building towards the next Great Battle.
The first player to win three Great Battles wins the war and is declared the greatest goblin warlord.

Gosu is a strange fruit of a game. I love the strategy involved in managing your cards, discards and activation tokens each round and the limitations imposed by the draw mechanic adds another level. At first I wasn’t too sure about the gameplay but it works really well and I soon came to really like it.


I give Gosu 6/10. The game is great as is the artwork but it doesn’t stand up to regular play. A great every now and then title for when you have 15-20 minutes.
Posted by Beard Plays Games at 02:59