Carcassonne Around the World: South seas... or... How I learned to love (meeple) again!

Carcassonne Around the World: South seas.

Over the past few months I have been quite absent from the hobby. Distracted by the real world and the virtual one and illnesses aplenty, but recently I began attending a gaming club formed by a friend and my interest in all things cardboard has been rekindled. Thus, with an approaching birthday, I requested things of a 'gamey' nature and I was thankfully provided with much in the way of new cardboard and plastic, and thankfully only a little meat! 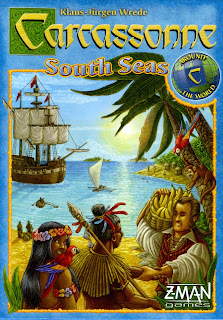 Enter stage right: Carcassonne Around the World: South Seas. One of the newer offshoots of the much praised intellectual property, and considering the setting the namesake is merely there to tie in to the cash-cow of its elder bretheren!

The game plays very close to the formulae laid down by the original, draw a tile, place a tile to build, extend or complete a feature, place a meeple and hopefully score ye them points! But this is where the similarity ends. In the South Seas variant the tiles feature sea instead of fields, islands instead of cities and wooden walkways instead of roads. These all come with symbols of wares on them. Bananas for the islands, Fish for the seas and Oyster/Clam shells for the walkways, because now, instead of just moving your meeple down a scoring track things are done a little differently. At any given time there are four boat tiles, drawn randomly from a pile, with varying ammounts of wares on them and a point value. When you complete a feature you now gain those goods in little wooden form. Tiny wooden bananas, fish and shells, which you then use to buy yourself a ship and rake in the points from said vessel.

A new level of strategy is present also as you only have four meeple Islanders at your disposal to gather your 'nanas, fish and shells but you can, instead of placing an Islander, take one back on any of your turns, effectively abandoning their unfinished developement. This can be played with great timing to effectively ditch a claim that's going nowhere and jump on another, more lucrative one, instead of waiting for the duffer to be completed!
Bananas and shells are awarded when the islands and bridges respectively have been completed, the fish however are a tad diferent. If an area of sea with a fisherman islander (laid down like a farmer from vanilla) is entirely encircled by islands and bridges then that islander receives a fish for each icon on the fenced area, However, if a tile is played that features a fishing boat (close up) then the present fisherman (men) receive all of the current icons but at the cost of losing one of the higher value icons for future fishing. This means that successive boats could be played on an incomplete fishery and whittle down the fish turn by turn. Good for you if you want to rack up the fish, annoying if someone uses it to crash your perch-party and dangles a line in your pond as you'll be seeing less of those fish you worked for!

The winner of the game is the one with the most points gained from their boats purchased with the wares and bonus points, one for every three wares they have left over at the end.
Carcassonne Around the World: South Seas really surprised me. I LOVE Carcassonne, it remains to this day one of my most played games as I like the simplicity with which it can be taught, the ease of play and the overall look of the game, but now it has been ousted from my affections by an exotic young upstart! The tactile element of the wooden wares tokens, the Islander meeple in their shorts, the look of the tiles, which look more vibrant and colourful, to the new scoring system removing the scoring track, which was one of the only things I wasn't keen on from vanilla.
Carcassonne Around the world: South Seas is a fantastic game for a varied group and for players of any age, My six year old got it within three or four turns, and I happily recommend it.