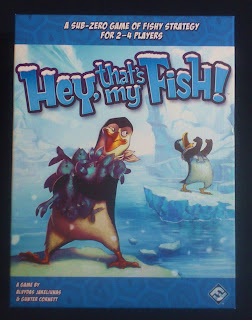 Light, that’s the first word that springs to mind. For a box almost as big as the Talisman box there is a distinct lack of weight! The reason for this shall soon become apparent.
The artwork on the box is well done and in keeping with the humorous nature of the game within and the usual FFG vinyl effect is present too giving the box a good sturdy feel.

When opening the box the reason for the weight issue become apparent, FFG seem to be shipping fresh air around in their boxes! The contents would easily fit inside a box half the size, if not smaller, the card insert to hold the components takes up more room than they do! But this is only a minor quibble (if a daft one).

The rules are simple and well presented on a double sided page explaining the easy, but addictive, game format of move, take fish, win game. Bonus points there for not using an unnecessary amount of paper for such a simple concept unlike some games companies.

The ice flow tiles are of the same sturdy vinyl effect card as the box so they will stand up to a lot of play without damage.
The penguins themselves are brilliant! Quite small but well sculpted, molded in an assortment of amusing poses (my favourite being the one raging into the sky!)

Gameplay.
The game is simplicity itself to play and takes seconds to set up, in fact it took me longer to get the box open than it did to set the first game up!

You begin by placing one of your penguins on a tile with one fish on it, the next player does so too and so on until all players have done so and this is repeated until all penguins have been placed.
On your turn you can move any one of your penguins across the ice flows, taking the tile you were stood on with you and removing it from play. You move in straight lines and your progress can only be barred by other penguins or missing tiles.
The main strategy involved is placement of your penguins. Trying not to end up trapped in a corner where your opponents can remove a tile or two and cast you adrift from the board, at which time you are considered eaten by killer whales!, but aligning yourself to do the exact same thing to everyone else while taking as many high scoring fish tiles as possible.
The rules are so simple that a full group of four were taught the rules before turn two of the first game and were penguin strategists extraordinaire by the third. It makes a great casual filler game for a busy game day and breaks up those times between big box games nicely. The penguin playing pieces are a nice touch and the tile quality adds to this.

I’ll give this game 9/10 as a casual game alone as if I compared it to most of my other games it would have a much lower score. Great as an introductory game and fantastic if you want a litre of American factory air as a bonus!

A fantastic way to spend ten minutes or many hours afloat on the ice and I would recommend this to any and all as a brilliant and inexpensive game for all tastes, from the hardcore to the casual.

Bonus game tip: removing tiles that are surrounded can easily disturb the neighboring tiles and ruin a game by forcing you to constantly rebuild sections of the board. To prevent this I recommend using Nerf darts, the ones with suction cup ends, as you can simply prod and lift a tile without upsetting the play area at all.
Posted by Beard Plays Games at 01:48