ThunderRoad... Mad Maxing it all over the tabletop!

Published by Milton Bradley games in 1986, Thunder Road is a car combat game with a unique twist, a never ending board (in a sense!)

The box art, the European release in this case, the U.S. version has a much more colourful cover, is reminiscent of Mad Max (the game thankfully features no Mel Gibson!) showing a dusty brown landscape picture of automotive carnage occurring behind a steel jawed, goggle wearing, stubbly racer, staring coldly into the foreground as people are quite possibly dying in horrendous ways in his rear view mirrors, probably caused by his aggressive driving!

Under the lid we find the two part board that forms the never ending racetrack. Two boards with interlocking ends with a desert road down the centre and bare wasteland on either side. The staring positions are clearly marked with the colour coded spaces for the vehicles and spots marked out for the wrecks which form obstacles for the racers. 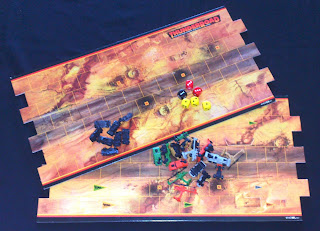 The cars come in four classes. Class 4’s are dune buggies, Class 5’s are racers (clearly modeled on Mad Max’s Ford XB Falcon hardtop) and the class 6’s are large six wheeled tank like vehicles and are the  go to vehicle for taking out your opponents. Each team also has a helicopter to use as extra attackers. They are two or three part plastic miniatures/playing pieces and they are quite light but sturdy enough to withstand repeated play. They aren’t amazingly detailed but this game was aimed primarily at kids when first released so this is to be expected.
The wrecks, oddly my favourite part, are black plastic burnouts on their roofs and are used to block movement on the road.
The dice are the usual old MB wooden dice found in all of their games at the time, they feel okay but have almost no perceptible weight to them at all! There are three yellow D6 used for movement, you roll all three and choose which vehicle you apply each result to. A black die with scores of 1 – 4 which is rolled if you have any vehicles on the tarmac which adds bonus movement, and then two red D6 used for combat. The dice are possibly the only thing I dislike about the game but for the time they were produced they were some of the better dice included in a game of this kind.

Each turn the players roll the three yellow movement dice, plus the black dice if they have cars on the tarmac, and apply the values rolled to their cars in any order they wish and move ever forward (literally too, reverse movement is against the rules. It is a race after all!)
You cannot move through active vehicles at all, and to move through a wreck you must roll 4.5 or 6 on a battle die or become wrecked yourself. 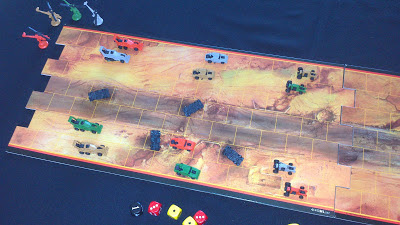 You can attack your opponents three ways. Moving into the same square allows you to make a Ram attack, you each roll one red battle die and add the cars class to the result, if the attackers score matches or is greater than the defenders the attack is successful and the defenders car is wrecked, any other result is a miss.
Moving to a space directly behind an enemy a shooting attack can be made by rolling a single red die. If the result matches or beats the class of the attacked vehicle then the shot is good and the car is wrecked.
Finally, once per turn, you may call in your attack chopper to make a single shooting attack against an enemy. The bonus of the chopper attacks is that they do not cause obstruction so if you fail a shot with a car you can always try again with a chopper! 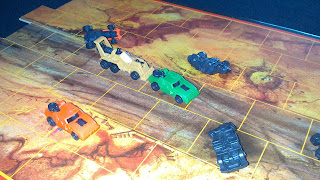 Once a cars movement takes it beyond the edge of the second board the track moves on, leaving behind any wrecks and slow racers! The first board is removed, losing any vehicles still on it, and placed at the front to form a new stretch of road. The only thing to stay are the black wrecks which are placed on their marks to make new obstacles.

The race is won when one player is the only one with active cars on the board.

For a children’s game, and a relatively simple one at that, this game is a immense amount of fun! My group can never have just one race as there are almost always scores to be settled from the last one and vendettas seem to carry over from game to game regardless of the days between!

For those wanting more than a simple game there are a few homebrew advanced rules to be found online. My favourite so far is ‘ThunderRace’. which can be found on boardgamegeek.com, and it adds rules for armour, chopper to chopper combat, dropped weapons such as firebombs and other hazards. It adds a lot to an already enjoyable game.

For the price a good condition copy of ThunderRoad goes for online I would say that anyone whose interest is peaked by this, or any other review, should give it a go. It is a good game and would make a nice, different, addition to many a collection. I give it 7.9/10. It would score higher were it not for the old components, but it’s damn close!
Posted by Beard Plays Games at 08:13