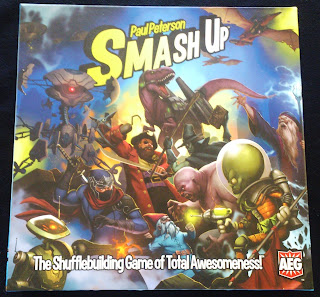 Released in 2012 by AEG (Alderac Entertainment Group) Smash up is a 2-4 player ‘Shufflebuilding’ game featuring a host of stereotypically geeky factions from aliens and robots to the often conflicted ninjas and pirates.
The artwork on the box, which itself feels nice and sturdy with a vinyl-esque finish to it, is really good. Featuring an all out brawl between the contained factions and a very comic book styled title banner. This caught my eye the first time I saw it.
The rule book bears the same image as well as the games sub title ‘The Shufflebuilding game of total Awesomeness!’ and the rules are some of the most concise, simple and well written I’ve come across yet! They get the rules across with none of the usual messing around and unnecessary fluff that others are bogged down with. Some games, don’t misunderstand me here, benefit greatly from all of the added blurb that the writers put in but it isn’t always implemented in the best way, and this can make a slightly complex game into a sodding mystery when you have to sift a rule books pages for the one little box of text you need and find it hidden on a page that, at first glance, contains nothing important or related to gameplay. As I said, with Smash Up there is none of this, the rules are straight forward and uncomplicated and most of what you need to know is written on the cards themselves!
Inside the box was a treat too. The inside has a compartmentalized plastic insert, allowing you to keep your different factions separated when not in play and with enough spaces to accommodate future expansions, the first of which is out already. 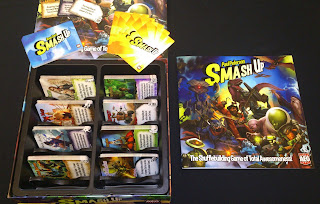 The cards are very nice. Not the best I’ve held but better than the average for sure. They shuffle very well, in fact out of the box they are probably the best shuffling cards to date (and considering the main theme of the game is ‘shufflebuilding’ this is a good thing!), and the artwork and finish is really good.

The cards are divided up into eight different 20 card faction decks and one 16 card Base deck.
The factions are Pirates, Ninjas, Aliens, Zombies, Wizards, Tricksters, Dinosaurs and Robots. Each one has different strengths and abilities and is divided into Minions and Action cards. Minions are used to score points and the actions are pretty self explanatory really, they let you do stuff!
At the start of a game the players chose two of these faction decks and ‘shuffle’ them together to form one deck, this is the ‘Shufflebuilding’ element. This creates the chances for many combinations and many random conflicts. 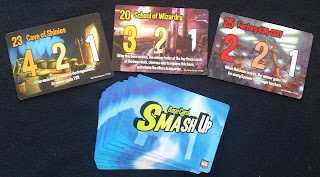 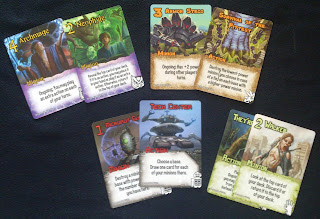 Based purely on the look and feel of the contents, and the rule book, I would give Smash Up 9/10 so far. Really well made, good looking and fun, and that’s before the first game!

Awesome Sauce!
This game is so simple to play and so fun! Each turn players get to play one Minion and one Action card, or just one of either. Some cards allow you to play extra minions or actions and even return cards from the discard pile (which for the Zombie faction is one of the main points!) and play said cards onto the base cards, of which there are one per player +1 (so a three player game there are four bases). 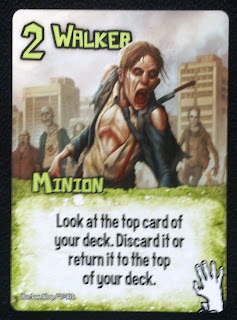 Each base card has a ‘threshold number’ printed on it and when the total strength of the minions currently on it exceeds this threshold the base is destroyed and points are awarded to the players in order of their total strength there i.e. the player with the greatest strength will usually get the most points and the second and third less and less. Each base also has an effect which is triggered when destroyed, such as allowing the winner to place one of the minions back into his/her hand instead of the discard pile (as this is what happens to any minions when a base is destroyed) or allowing the runner up to keep a minion there when the next base replaces the defeated one! 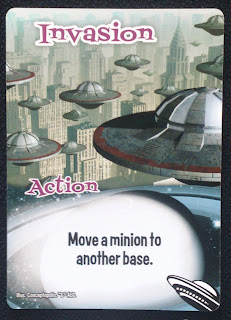 The game is a race to 15 points and this relatively low figure makes the game keep a great pace and stops the game from dragging at all! There is a mechanic that whenever one of the players 40 card decks runs out the discard pile is simply shuffled and restarted but in the games we have had so far, the game is usually well over by this point.

Smash Up is a brilliant, frantic, fast and funny game with the right balance of tactics, timing and last minute backstabbing to steal the high points. I stand by the 9/10 and would recommend this as an essential for any gaming group as an ideal quick game for any audience and skill level. Pick it up if you can, you’ll love it!
Posted by Beard Plays Games at 05:52