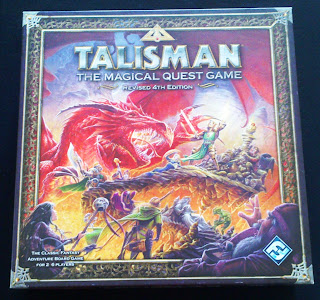 For a game that was first released in 1983 Fantasy Flight have done a good job of keeping it fresh, and before anyone gets all uppity I know just as much credit for this edition is due to Black Industries so leave the pitchforks alone for now!
The box art is very evocative and suits the game inside perfectly and the box is sturdy and well made, as are most FF games (as I keep saying in my reviews, I may stop one day!).
The board is MAHOOSIVE! That was the first thing I thought when unfolding it, it just kept going! We have a limited space for gaming and the board takes up almost all of it. Add one of the corner expansions such as the dungeon and we have a slight overhang. The spaces on it are clearly marked and decorated with an assortment of well drawn and thematic images. It is divided into three regions, the outer, which is the easy road and where you start, the middle region which is slightly harder but offers more chances to either gain strength and skill or die in equal measure. Finally the inner region, which has to be taken one space at a time until you reach the crown of command, at the very centre, and make a play for the win.
The rules are well presented and easily understood, so much so that my entire gaming circle had them learned by heart by the end of the premier game. The cards, of which there are many, are well done with art of an equal quality to the rulebook and the rules and events described on them are easily read and understood. My only issue is the size of the cards. Having rather large hands I find the act of shuffling a deck of 100+ half sized adventure cards, with more to add with each expansion, is a taxing affair at the best of times! The spell cards and purchase deck are the same size and equally good and the fate tokens, simply decorated card discs, are thick and sturdy and will stand up to much passing from player to spare pile each game. 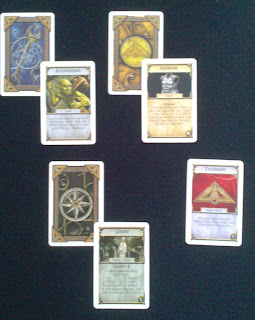 After the card board components we get to the plastic components. Starting with the 120 player counters, 40 red for strength bonuses, 40 green for health points and 40 blue for craft (magic!), these small plastic cones stack beside the players’ character card to show current health and any strength or craft bonuses they have earned so far.
The money earned in the game is represented by small plastic coins, which is a nice touch as most would simply opt for punched card coins such as in Descent V1.0 (I hate that game!)
Finally we get to the miniatures, which is the biggest update FFG made as the Black Industries version had card standees. These are very good, the scale is such that a full six players can stand on any one space with little to no overlap and are all easily distinguished from one another while playing. The sculpt quality is good considering the scale and the only issue I had was that the plastic is a little soft so thin sections, such as extended swords or staffs, can be bent while packed in the box so a little check is always needed when packing away to check for possible casualties. The character cards that reference the player pieces are clearly printed and easy to reference, the character portraits on them are not as good as the rest of the art in the box however so someone dropped a ball there I think! 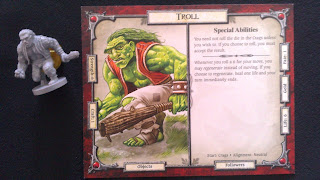 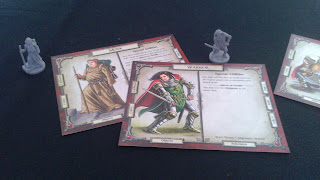 Before play I would give the components 8/10, some small issues but nothing to damage a score too much, some parts could be better and the issue with the small cards is purely down to my dinner plate hands so there’s nothing I could do about that one!!!
Gameplay.
Before I go on I need to make one thing abundantly clear.
If you are looking for an RPG style board game with plenty of strategy and decision making, where deals are made and people broken, look elsewhere, this game is not for you and if you still want to read on you’ll see why!
The core game mechanic is simple.
Roll the die
Move that many spaces
Do what the board or cards tell you
Rinse and repeat until you can make a break for the win!!!
The only kind of strategy or decisions you make throughout a game are whether to go left or right and finally, when you thing you are strong enough to handle it, when to make a move into the inner regions of the board and make a break for the crown of command, where you roll a die to see if you cast a spell, the only action you can take there, and if so everybody loses a life. Do this until everyone is dead and you win! Simple!
It’s not big (that’s a lie it’s bloody enormous really), it’s not clever but it is good. The randomness of the game will turn some players off but for those groups with slightly more casual members this game is a good one as the ease of play suits almost anyone.
After play the score I give is 7/10, the simple roll, move, obey sometimes leaves me wanting a little more but it is still a very enjoyable game and we still play regularly. 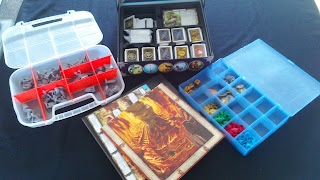 One thing in closing, if you are going to venture into the world of Talisman and drop some of your hard earned currency of choice in a retailers hands for an expansion or two (there are currently eight to choose from) then some form of storage solution is needed to reduce box rummaging. I would recommend fishing tackle boxes as a cheap option unless you want to create something more elaborate. It serves us well enough for now.