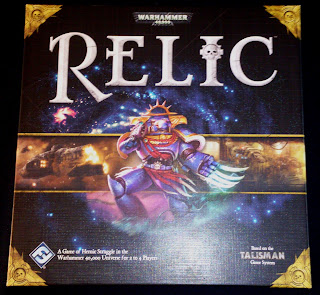 Before I start I should point out that there will be a lot of comparisons between this and Talisman seeing as this game is based on the Talisman game system and there are a lot of elements which haven’t changed much, or at all! A lot of the reviews I’ve read so far have avoided this but I think that a comparison is needed to see where this game came from and where improvement has been made.

When this game was announced in the misty past of last year I was so excited I could have happily skipped to the shops to pre order a copy! Talisman is one of my favourite fantasy board games and although I’m not the biggest fan of the Warhammer 40,000 franchise, (I personally prefer a fantasy setting) the prospect of them being put together to form some form of hybrid game was an exciting one.
I decided to wait until the game was released, and I could get a play test of it, before I bought a copy. Coincidentally, not too long after release one of my gaming group picked the game up and brought it round for a game and a thorough rummage through the gubbins! (He even left the tokens unpunched for me to punch out as he knows I derive some form of childish enjoyment from it! Ta muchly Rich!!!).

The box is the same size as that of Talisman, featuring your regular 40k style artwork depicting an Ultramarines Space Marine on the box lid and the back has the usual fare of game and contents guff found on all Fantasy Flight Games.

Inside the box the board the board is very similar in arrangement to the Talisman board but this is to be expected but I have a slight issue with the colours. It’s a little dark! The cards are easily overlooked as the artwork on the board is very ‘busy’. There is a lot going on all over the board, as though the artists were getting paid on commission and wanted a new car. The quality of the work is fantastic, don’t get me wrong here, but they could have reined it in a little. The Talisman board had a good balance of detailed pictures and panoramic views with a great balance of colours, and I know that this is the ‘Dark Future’ but I think the brief was read a little too literally.


Moving on from this, before I lose any more readers, the cards are brilliant. In a different approach than Talisman took each space has one of three coloured icons on it, representing Strength, Willpower and Cunning (Red, blue and yellow respectively). These three different icons have separate decks of encounter cards, making a large improvement on Talismans single enor-frickin’-mous pile of encounter cards which made shuffling a feat of endurance. Each colour has a balanced mix of events, which can have many random effects on the game and players, Places, which stay on the board and offer new ways to progress and move, random pieces of equipment and then enemies which must be defeated to progress further. There are also mission cards which must be taken by the players and completed to gain access to the eponymous relics, artifacts and weapons of a bygone era giving you fantastic power ups and allowing you to progress into the inner region of the board and go for the win. Certain enemies and events will force players to take Corruption cards, which can have positive or negative effects for the player but too many will kill you deader than disco. Equipment cards containing basic weapons and armour to aid you in battle. Finally we have the power cards, these are similar to magic found in Talisman but they have a value as well as an effect and can be used instead of a dice roll, for example if you have to roll a five to win a fight and have a power card with a value of five, you can use that instead. This, in my opinion, is better than the fate system from Talisman as that just gives you re-rolls, leaving the outcome just as random as the initial roll. This allows more control over certain events and gives you more of a chance. 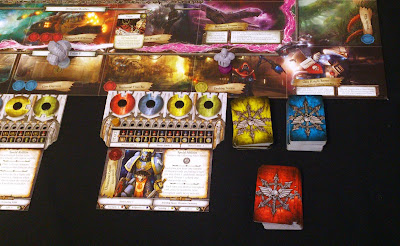 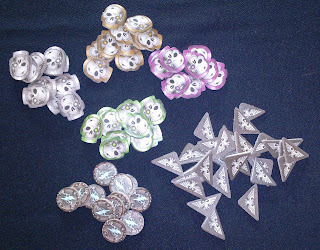 The tokens are good, they have the usual vinyl effect to them so they feel sturdy, there are skulls in each of the four player colours, used for various purposes throughout the game. Charge tokens, for abilities and areas with limited uses and Influence tokens. These are basically your currency and I think they missed a trick here. In Talisman the gold coins are plastic molded coins, which add a really nice tactile element to the game. Here they are just little cardboard triangles bearing the Imperial Aquila. They could easily have done some imperial credits or some other currency unit and made some equally nice pieces but it’s nothing worth marking them down for! 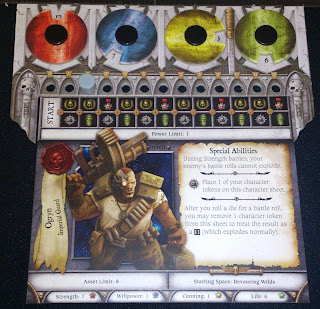 The player reference material comes in two parts in this game. First you have the character cards which show any special traits they character has, starting strength, willpower, cunning and health values and a character portrait, which are a marked improvement on those found in Talisman, they are really good here.
The second part is a new addition to the system and a bloody good one. It is a level tracker. Each time you trade in 6 points worth of enemies (based on the threat values on the enemy cards) you progress to the next level and gain two bonuses, usually an increase in one of your skills and then your characters bonus which can range from extra influence tokens, power cards extra increases to stats and even completed mission bonuses. The stats are tracked with four dials numbered one to twelve (which gives the skills an upper limit this time) and this makes a great improvement to the countless plastic cones used in Talisman.

Finally we get to the playing pieces themselves, which was one of the main selling points for many people. They are incredibly well sculpted busts of the characters which can be affixed to one of the four coloured player bases. They are fantastic! The level of detail is very high and they fit the theme very well, and on top of that they look great on the table. Some people will hanker for miniatures as opposed to busts but these make a refreshing change to the regular slew of miniatures packaged with games these days, and if you want to have a dabble with some brushy business they look great painted, as a quick Google browse will show.

In terms of gameplay there isn’t much of a difference between this and Talisman, the core mechanic of roll a d6, move and do what the board or cards tell you to do, rinse and repeat remains but the changes make it stand apart. The leveling up adds more control to your progression and getting killed in combat no longer means getting lumbered with a new, weak character, you simply lose some of your gathered gubbins, influence and unspent enemy points etc. and simply move to a safe spot and carry on. The only way to lose a character is to reach your corruption threshold, which for most is 6 corruption cards.
Unlike the vanilla Talisman game, Relic comes with five different scenarios out of the box, making for more play options while waiting for the inevitable expansions and the changes to character progression means that the game runs considerably quicker than its predecessor which in turn means that a game of Relic can be fitted into a standard gaming day instead of being the sole event. This also works well as a two player game as it runs quicker and easier. 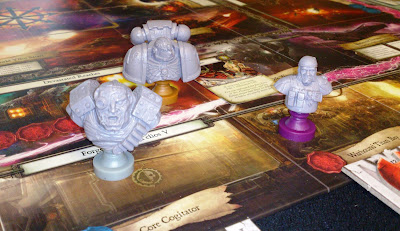 After playing Relic and looking back to my review of Talisman in which I gave it 7/10 I would say that Relic deserves 8/10. The improvements and changes to the system all work well and make for a great gaming experience. It would never replace Talisman but it makes for a quicker alternative and a different choice for those with a penchant for some sci-fi or just 40k fans. I’m not so sure that hardcore GW fanboys will take to this as fanboys of any material are hard to please, especially with seeing said material in a new format, but I would implore them to take a chance on this game as all of the lore and feeling of the grim future is present, along with many well known, famous and infamous, characters and beasts from the farthest reaches of the galaxy, and FFG have done a stellar job.
Posted by Beard Plays Games at 11:44