Giants - get them heads movin'! 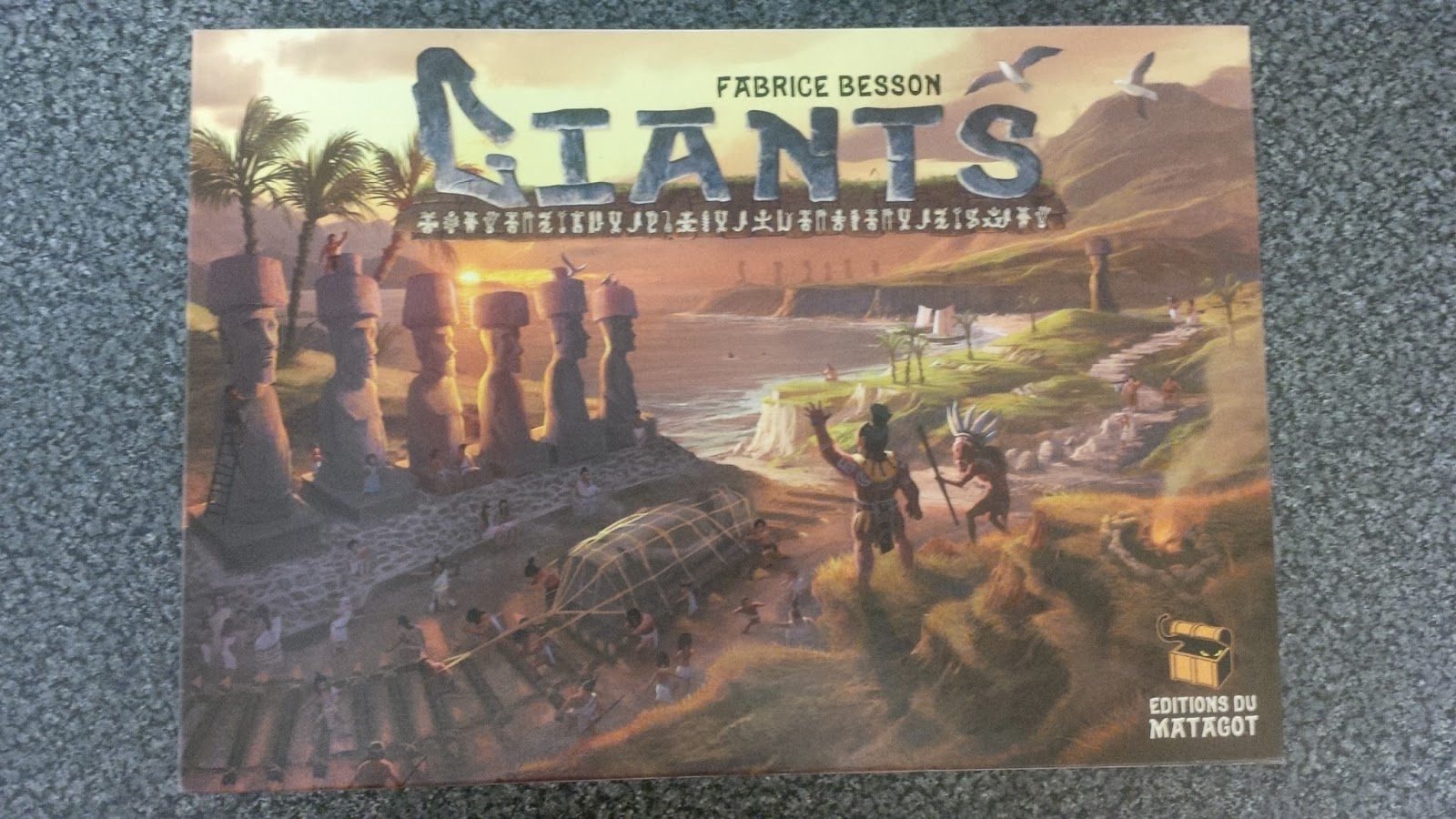 Published by Asmodee in 2008 and designed by Fabrice Beesson, Giants is a pick up and deliver/auction game where you play the role of tribes on Easter Island building the famous head statues known as Moais and transporting them to the coast and erecting them on their platforms, Ahus.

The components are brilliant in Giants and for them alone it is worth the price.

Starting with the box itself, which is a sturdy beast, the art design, by Miguel Coimbra, is beautiful and very thematic. The board is equally gorgeous depicting a top down view if Easter Island and is pretty accurate in depicting the shape (which I would hope it would) and the placement of the Ahus along the coastline for the most part although the scale means they are not 100% accurate, but totally forgiven. 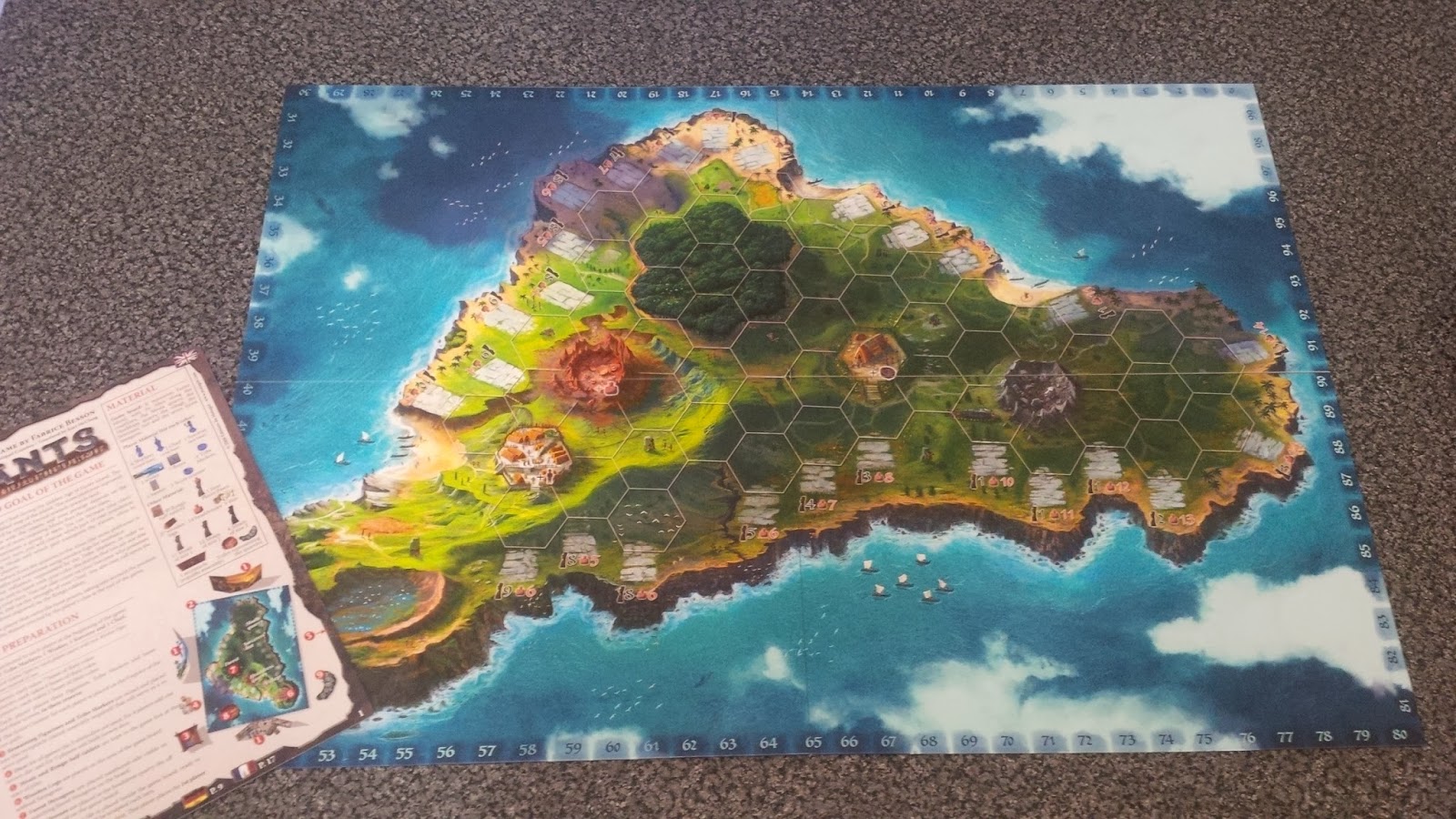 The cutouts for the auction block (Quarry) and headdress spot (clay pit) are a nice touch but could easily have been put in as a space in the board, the hex tiles for the forest, where you harvest logs for transportation, are double sided showing verdant greenery on one side and a stump filled empty space on the other which is a nice way to show which spaces remain for harvesting, and a self constructed storage bin for the tribe markers to be held in before you claim them. The smaller card components comprise of tiles to show which spots on the board you have reserved for your Moais to stop your opponents from claiming the high spots, and Rongo tablets (!) which are bought in halves and a full one can be used to special effect during the game.

On to the plastic! Starting with the dice, which for those of you who have read previous blithering rambles will know are the first thins I look at, they are really nice! Really good quality production and each face shows either a Moais of a different size (1-3) or a broken Moais and when rolled at the beginning of the turn show how many are available to buy, a broken one obviously showing that some cack handed mason has duffed one this time so someone may be going without!

Each tribe comes with three different members, one Chief, one Sorcerer and six workers molded in five colours and each different class is easily distinguishable from the other by sculpt alone but each has a unique base shape too, just to help. The tribes also have six tribe markers each, used for currency, and a score marker. 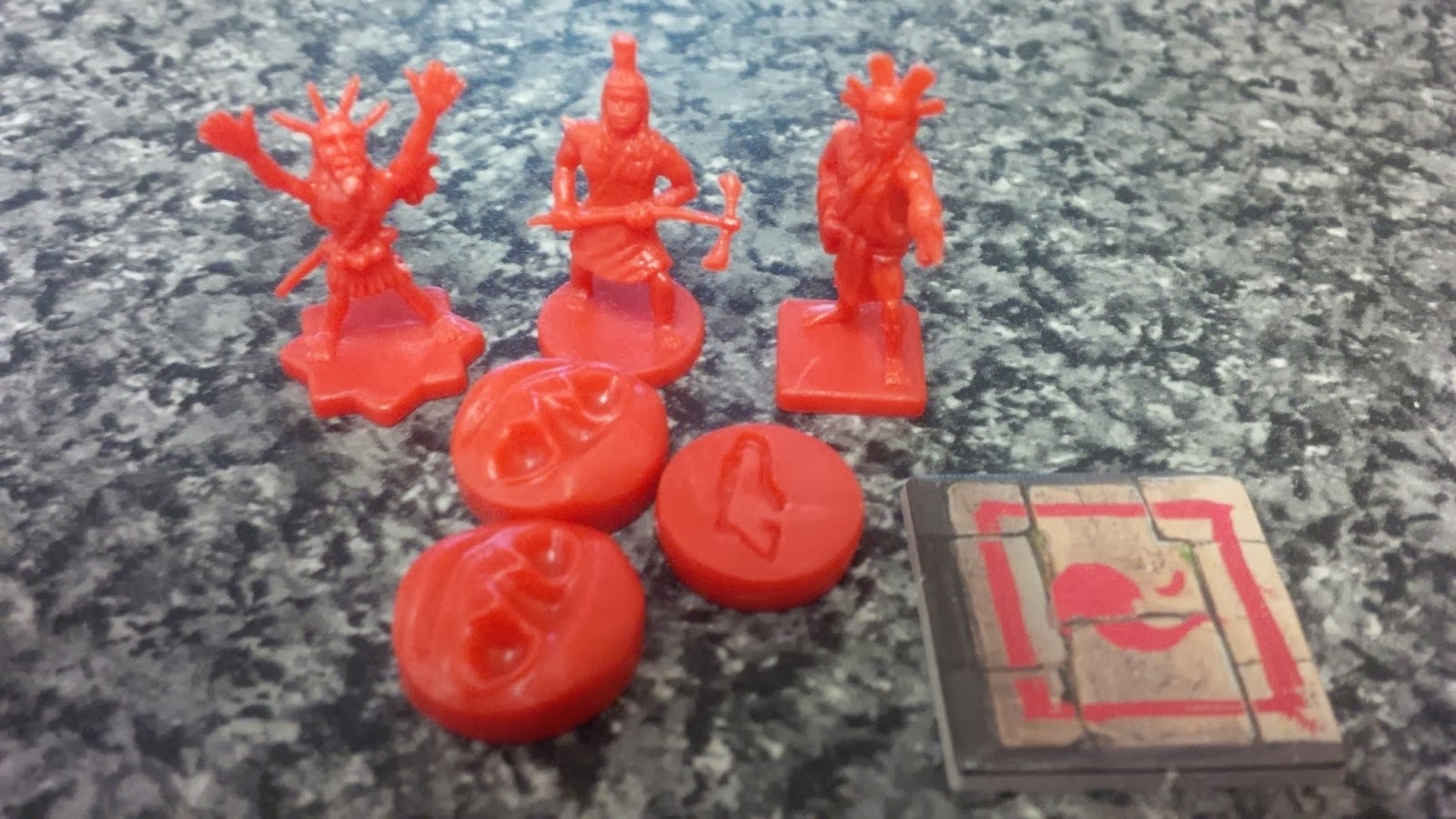 The Moais statues are brilliant and chunky little buggers which look fantastic once they start hitting the board. The three different sizes are cast in a different shade stone effect plastic so the small difference in size from 1-2 or 2-3 doesn’t cause any difficulty for the player and the starting player marker is an extra Moais with the headdress permanently attached. The headdresses themselves are a terracotta colour and attach (with great sodding difficulty in 50% of the cases) to the heads of the Moais by sitting them on top and ‘twisting them!’ so the indentation in them squeezes the head beneath. I HATE this one thing about the components as I know that with time they will just wear down and fail eventually.
The final components are the wooden logs you harvest from the forest which are literally tiny wooden logs! Tiddy lengths of dark brown dyed dowel which unless you have some little bowl to store them in will make a break for the edge of the table at the first opportunity and then take refuge in the carpet or the dog!

All in all, components alone I love what you get in the box before you start playing and it looks great on the table. The individual pieces all pop and stand out distinctly from one another

The game, as I said before, is a ‘pick up and deliver’ game with an auction mechanic to get your goods. 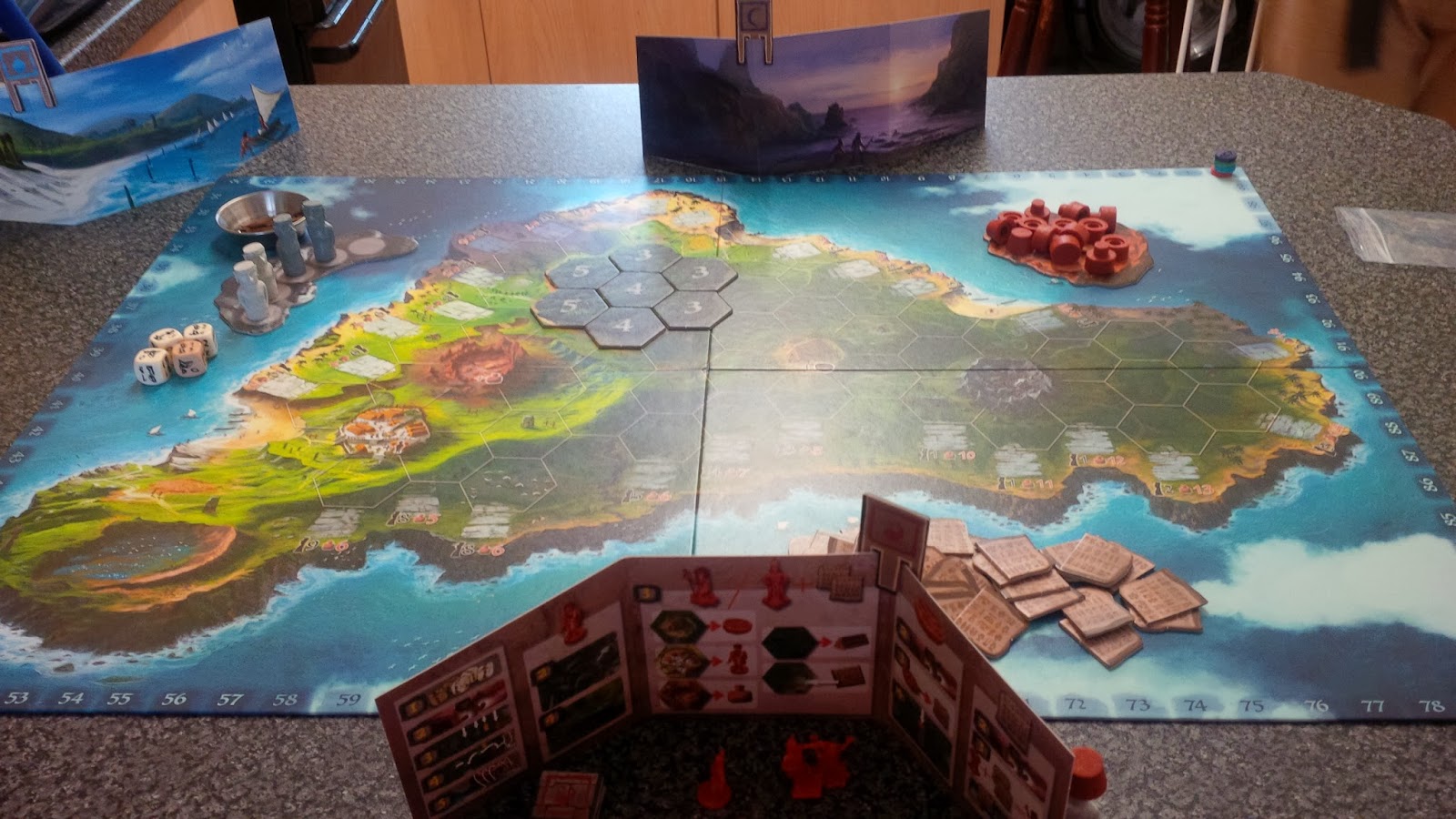 Phase one and two:
The players start a turn by rolling the quarry die to see how many Moais are produced for auction this turn and then the players secretly decide how much influence they are going to commit to get a Moais and what size they want to buy. The highest amount of Tribe Markers played goes first and the amount of workers they bid show the size of Moais they can take, three workers for instance can take any size of Moais but two caa only take a size 1 or 2. This is where the superiority of a Chief comes into effect for the first time as they count as three workers on their own, saving workers for later if you need them.

Phase three:
Now the players place their tribesmen on the board.
Workers: Any not used in the auction can be placed on the board in order to transport Moais or headdresses later in the turn so they go on the hexes you wish to traverse along with up to two wooden logs to aid in transportation.
Sorcerers: are placed on special hexes to gain special actions...
The Village – Gain one worker fron the resource bin.
The Sorcerers Hut – take a tribe marker from the resource bin.
The Forest – take as many logs as are indicated on the tile you are on.
An Ahu – Reserve the spot with a base from your tribe.
Headdress Quarry – Sculpt a headdress.

Workers, logs and tribe markers are held behing your player screen, hidden from your opponents. Headdresses are kept in front of your screen.

Chief: If you have two half Rongo tablets you can spend then and use the Chief in the same way as a Sorcerer or just place him on a hex to count as three workers for transport if you didn’t use him in the auction.

You can also place an unused tribe marker in fron of your screen to buy a half Rongo Tablet for later use, or pass until each player is done with this phase. 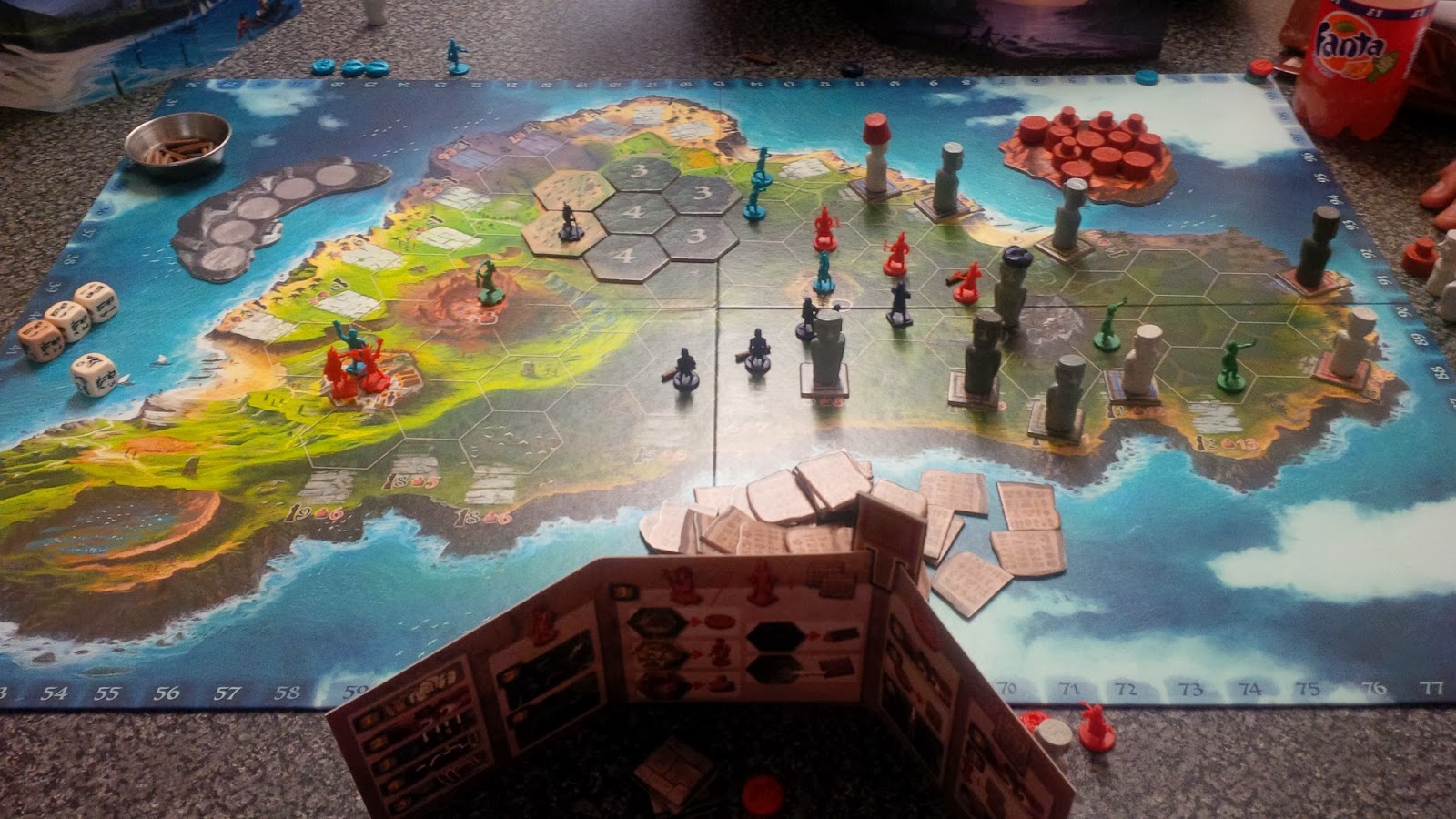 Phase four:
Transportation.
To move a Moai the space needs to contain at least as many workers or logs as the size of the Moai itself , headdresses take only one worker, but logs are removed at the end of the turn so if you are a ruthless sausage you can plot your course where your opponents have used their logs, bearing in mind the limited number there are, and use them while saving your own for later use, you also get bonus points for using other players workers for moving your Moais so planning your route is important.
Once a Moai is at an Ahu spot and you have at least one worker in an adjacent hex you can erect the Moai, with one of your tribe bases beneath it. The further away from the Quarry you place a Moai the more points it is worth at the end of the game and conversely the further the headdresses are moved from the clay pit the more they are worth. In practice though we found that if a player makes a rush for most of the mid range plots they can easily score more than enough to win over someone who goes for high scores, making a battle for the mid range Ahus a regular event.
Headdresses are erected in the same way on top of your Moai.

If you haven’t managed to move a Moai or a headdress to an Ahu by the end of the turn you can use a tribe marker to mark them as yours, if not any other player can do the same and steal them from you.

Phase five:
End of turn/game.
All used workers, Chiefs, sorcerers and tribe markers in front of the player screens are taken back behind them and a new auction begins again.
If at the end of phase four any player has placed a Moai on every one of their tribe bases the game ends and the scores are tallied for the erected Moais and headdresses. A better variant is present in the rulebook however in which the scores are applied as and when Moai are erected, this plays much better in this game for me than the hidden score option. 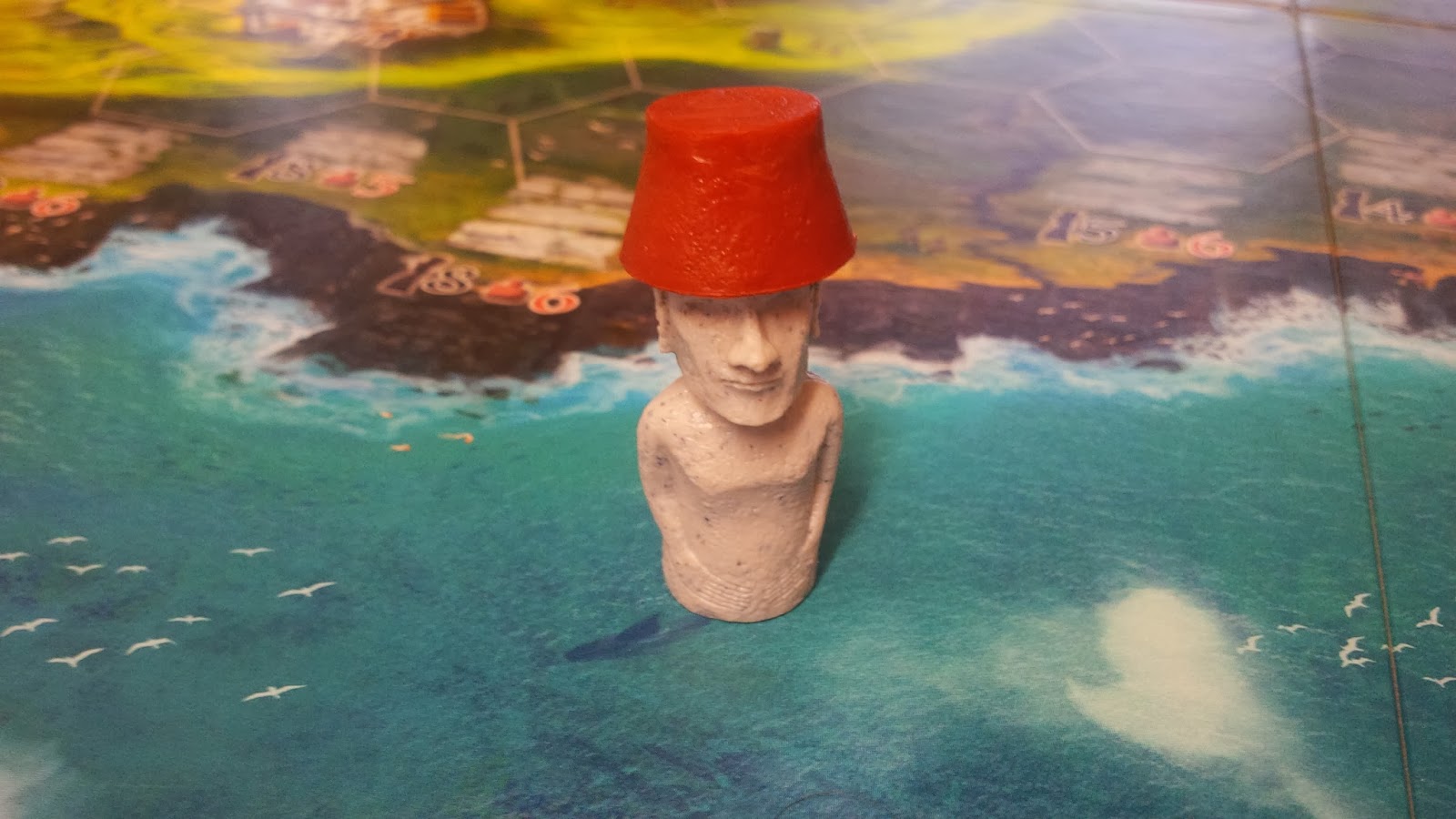 Final Thoughts
Although my interpretation of the rules/phases may seem a tad complicated (to me it seemed that I made it seem harder than it is) Giants is a great game, and as my first foray into pick up and deliver style games I gather I could have done much worse! The game is simple yet tactical at the same time and looks great when you are playing.
If you don’t want to get bogged down in a heavy game Giants plays in 60 mins once you have a game or two under your belt and is really fun for the price it can be picked up for!

I’ll give Giants a 7/10. While I haven’t said much by way of criticism, save for the headdress issue, there isn’t anything truly amazing in it. A really solid game and worth the time to try for anyone interested.
Posted by Beard Plays Games at 07:57