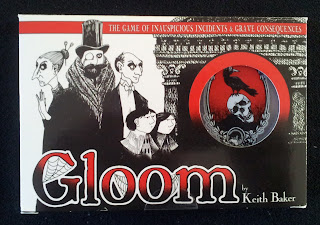 To say I was expecting a slightly larger package when I ordered Gloom I was pleasantly surprised when the small box plopped onto the mat below my letter box! The packaging itself is very well presented, using a black, white and red colour scheme the mood for the game is set before you even open it up and get into the unique cards within. The blurb on the back sets the scene for the game with a brief gameplay rundown below a banner stating “The sky is gray, The tea is cold, And a new tragedy lies around every corner…”

The rules for the game are printed on a rather flimsy piece of paper but are easily readable and are just as easily understood as the gameplay mechanic is a simple one.

The cards are BEAUTIFUL!!!
They are printed on clear plastic and printed on both sides so you can hold them up to the light with little to no distortion from the image on the rear of the card. Each of the family members are accompanied by an amusingly dark piece of text about themselves and a black and white portrait of them on a colour coded background for each family. Each family has five members and the draw deck is comprised of 58 modifier cards, which can be either negative which is good for you or positive which is bad for your opponents, 12 event cards which act as single use effect cards to either give yourself the edge or severely hamper an opponents strategy, and 20 untimely death cards which are the most important cards in the game as you need these to bump off your thoroughly depressed family members in order to score points at the end of the game. The main objective of the game is to make your family as miserable as possible using the modifier cards, with such unfortunate events as being “sickened by salmon” or being “chastised by the church, and all the time attempting to cheer up your competitors families by making them fall in love or becoming popular with parliament!
When your family members are suitably depressed you can play an untimely death card and aid them in shuffling off their mortal coil in as unappealing manner as possible.
Once one family is entirely dead the game ends and the player with the unhappiest dead family wins the game, those members still alive do not count.

The game has a very simple mechanic to follow making it an easy one to pick up for players of any skill level. Each player has a hand of five cards and each turn they may play or discard two cards with the exception that an untimely death card may only be played as the first, ensuring people don’t depress then immediately kill their characters. After a player has played their cards they draw back up their hand size (some cards increase or reduce the hand size) Some cards have continuous effects as long as they are on your family members but it never gets over complicated and most games are over well within the average 60 minutes given.


One of the greatest elements of this game is the story telling. It’s infectious! We found that even staunch refusers of roleplay were crafting tales of woe for their poor families which branched with each soul crushing event that befell them, and adding to the tales of other families with a delightfully whimsical tone as a wonderful event cheers up an opponents character, with a saccharin sweet smile and evil intentions all the way!

This game is a treat for any table and no matter who plays they will be hooked before the end!
9/10 I would have given this game a 10 if not for the smell of the plastic cards upon opening dissolving my eyebrows. The new plastic smell dissipated within minutes but the memory of the odourful punch in the nose is one that stayed!!!!!